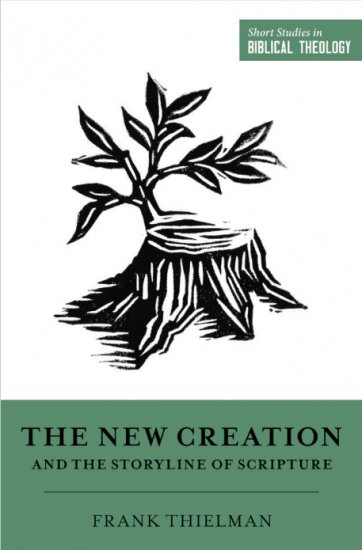 The Short Studies in Biblical Theology series exists to help Christians understand the Bible through manageable books. There is a plethora of academic monographs and tomes out there, but very little runs down to the general Christian population. These volumes are written by scholars who know you’re busy and you don’t have much time to read a 500-page book on the biblical covenants, new creation, or work. Instead, in the SSBT, you can read about these topics in books shorter than 150 pages. Each volume refers you to enough books should you want to know more about the particular topic.

Although “new creation” only appears twice in Scripture, in this volume Frank Thielman focuses on how the theme of the new creation runs through the whole Bible. This theme “summarizes the Bible’s plotline neatly because it takes in the sweep of the world’s history from the Bible’s perspective. To call the world a ‘creation’ assumes that it has a Creator, and to refer to a ‘new creation’ implies that something happened to the world that makes its renewal necessary” (p. 14). Rather than looking at every book of the Bible (as some books are wont to do), Thielman looks at eight different books over eight chapters: Genesis 1-4, Isaiah, Matthew, Acts,
Galatians, 2 Corinthians, Ephesians, and Revelation 21–22.

Thielman, Professor of Divinity at Beeson Divinity School, does a fantastic job of getting to the heart of who God is as Creator, the authority he gave to humanity, and how Adam and Eve threw it away for knowledge apart from God’s provision for them. Though they were made in God’s image (thus, representing him and being “like him”), they believed the serpent when he said God was keeping something from them, for if they ate the fruit they would “be like God, knowing good and evil” (Gen 3:5). The death that results from this is first and foremost exile. It is spiritual death from God; Adam and Eve must leave the Garden of God’s presence. Physical death follows from this.

Now humanity’s life is limited, and they can no longer be allowed into God’s presence on their own. Yet God has not abandoned his creation. He makes clothing for Adam and Eve from animal skins (3:21). He accepts Abel’s offerings (4:4), he instructs Cain about his sin (4:6-7), shows mercy to Cain even after Cain refused him (4:15), and he grants Adam and Eve another child after Cain kills Abel (4:25-26). The good world is now marked by having people who disobey and/or distrust their Creator and are violent toward each other. How will it change?

Thielman moves swiftly through Israel’s history in the Pentateuch, noting how Israel as a nation failed at the mission God gave them (p. 38), but Deuteronomy clarifies that God will initiate the required change—circumcised hearts (pp. 39-40).

Thielman, following Paul House’s outline, divides Isaiah into seven sections. Isaiah focuses on the fact that God will restore “the earth and its peoples to an environment of justice, peace, abundance, and fellowship with the Creator” (40). The book of Isaiah begins with Israel, a rebellious son, full of bloodshed and ends with God promising a new creation, a new people. Throughout his book he promises a coming Davidic king who will be a source of blessing for Israel and the nations because he knows the Lord and has the Spirit upon him. He will rule and reign in righteousness. God calls forth a royal servant who will take on the punishment Israel deserves making atonement for their sins (53). There are hints throughout the text that this king will be God himself, the great Shepherd.

Matthew shows us how Jesus fulfills Isaiah’s prophecies. Jesus proclaims a new law (Matt 5-7). He fits the picture of the “wise, royal ruler of Isaiah 11:1-16” (p. 63). He is the great King who acts righteously and brings peace with God through his sacrificial blood. Through his death, Jesus establishes the new covenant by which those who enter it will receive God’s Spirit to walk with him as his children. Jesus’ death includes people of all nations. God is with his people again.

In Ephesians, Paul shows us that this group of people, Christ’s body, who are in the new covenant together, are being built up together in Christ as a temple. They are a unity who should live in harmony with each other, acting with justice and truth as God did in Isaiah 59. Thielman writes that Christians “carry out their work dressed in the peace that the gospel brings, in their trust in God, in the salvation they have received, and in their devotion to the word of God and prayer 6:15-18” (109). Rather than being influenced by the city of Babylon, they will endure and live in the New Jerusalem where God’s presence will be forever.

This is a really great series. I’ve been very impressed over the quality of the series and yet how short the authors are able to keep their books. Thielman’s volume is excellent. It’s simple, easy to follow, but still deep. He draws out insights born out from a mature scholar and years of study. I highly recommend this book (as well as the whole series) for teachers, pastors, and laypeople.

Buy it from Amazon or Crossway!

Disclosure: I received this book free from Crossway. The opinions I have expressed are my own, and I was not required to write a positive review. I am disclosing this in accordance with the Federal Trade Commission’s 16 CFR, Part 255 http://www.access.gpo.gov/nara/cfr/waisidx_03/16cfr255_03.html.