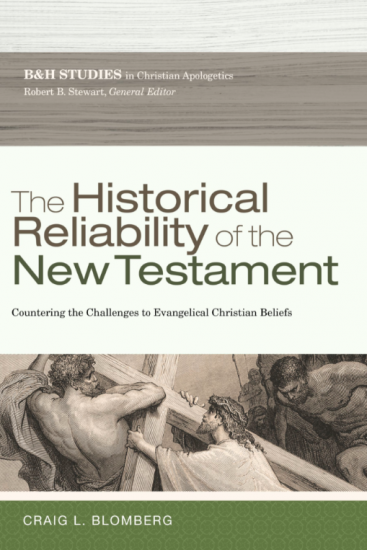 Craig Blomberg, Distinguished Professor of New Testament at Denver Seminary, offers a very good, up-to-date overview that is “conversant with a broad cross-section of this research, which can be understood by a wider audience” (xxi). He wrote this book because it’s difficult to find one volume that treats historical issues in the New Testament. (He refers the reader to a few books that survey sections of the NT. He has written two books treating historical issues in the Gospels and specifically in the Gospel of John.)

This book has six parts with fourteen chapters total:

Chapters cover topics such as the genre and composition of the Gospels, supposed contradictions in the Synoptics, and how redaction criticism helps us understand the differences between the Synoptic accounts—the infancy narratives, Jesus’ ministry, and his death and resurrection.

Blomberg then lends support to the stories we find in the Synoptic Gospels, how unlikely it would have been to make up the virgin birth, or how unlikely it would have been for the church to make up certain positions Jesus took. Jesus had a strict position against divorce and his affirmation of celibacy. The Jesus Seminar denied that Jesus made any of the claims in his eschatological discourse (Matt 24; Mk 13; Lk 21), but that would make Jesus a very unique “high profile Jewish teacher”—he would have been the only one who didn’t make such claims!

Blomberg argues that John the apostle authored the Gospel of John. The temple cleaning could have happened one time, but it’s very likely that it actually happened twice. The Jewish authorities may have hoped Jesus that the sign Jesus predicted wouldn’t come to pass, this shaking him. Cleaning the temple three years later would show him to be without shame, “unaffected by social restraint” (195).

Did Paul write all of his letters? As careful scholars have found, “there are no actual examples in early Christian history of a document known to have been written by someone other than the person to whom it was attributed” (349). Bart Ehrman popularized the view that the NT books many believe to be pseudonymous should be understood as forgeries. Joe Schmoe knew no one would read his letter, so he passed it off as having been written by the grand apostle Paul. But this belief is perpetrated “without any new discoveries from antiquity” (350). At the same time, many don’t budge an inch in saying that pseudo unity could be an option at all, even writing doctrinal statements against it.

Blomberg helpfully presents a spectrum of views on authorship on the ancient world. What we don’t know is “how first-century Christians would have envisioned these practices” (357). Given that many books in the OT Apocrypha and Pseudepigrapha are pseudonymous, is it not possible that Jews in the first century would have been okay with a pseudonymous NT letter? Blomberg’s point here is to help both sides respect the other side. Some pastors and professors have been fired from their churches and seminaries for holding to some form of pseudonymity, and others think that the case for pseudonymity is a closed case. Looking at the contested letters of Paul, Blomberg believes that they were written by Paul, though he could have used an amanuensis for some (like Ephesians). (He also looks at problems surrounding authorship for the Catholic (or General) epistles).

There are two chapters in Part 5. In the first, Blomberg surveys gnostic texts (such as the Gospel of Peter and the Gospel of Judas). Blomberg offers information on the research of such documents and the controversies surrounding them, and he helps you to see that they are too far-fetched to be anything like what we read in the NT. The second chapter covers textual criticism and how the NT canon came to be.

Some readers may be put off by the immense size of the book (the book proper is 725 pages). But the font size and one spacing are surprisingly big (at least compared to the other books I read). Tightening up the line spacing and font size would have made for a shorter book (one that is easier to hold too). Regardless, Blomberg’s level of scholarship is incredible, and he writes for the church. While one could easily quibble (or disagree) with some matters, the fact that this book covers the whole NT is reason enough to buy this first if you’re looking for a book on historical matters. I haven’t written about every section, but Blomberg’s work is a treasure trove of information written by an evangelical scholar. I wish I could say more, but there is just so much here.

Don’t forget to buy Blomberg’s books on the Synoptic Gospels and in the Gospel of John. Pair this with Kenneth Kitchen’s On the Reliability of the Old Testament.

Buy it from Amazon or B&H Academic!

Disclosure: I received this book free from B&H Academic. The opinions I have expressed are my own, and I was not required to write a positive review. I am disclosing this in accordance with the Federal Trade Commission’s 16 CFR, Part 255 http://www.access.gpo.gov/nara/cfr/waisidx_03/16cfr255_03.html.