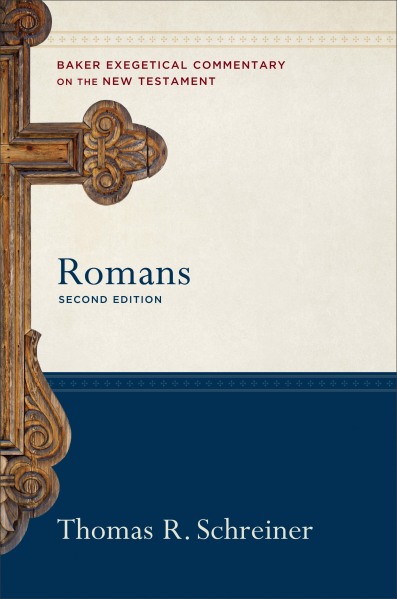 The Baker Exegetical Commentary series aims to be both readable while paying careful attention to important Greek exegetical matters. Each volume is written with pastors and teachers in mind so they can teach God’s uniquely inspired word. Tom Schreiner is the James Buchanan Harrison Professor of NT Interpretation and Professor of Biblical Theology (1997) and the Associate Dean of the School of Theology at SBTS. Schreiner has been a NT and Pauline scholar for almost 40 years now. His first volume was published in 1998, and has been a massive help for many who have studied, taught, and preached through Romans.

Schreiner’s commentary is attuned to understanding Paul’s flow of thought, which is very important to understand anything Paul says in any of his letters. No verse is an island, and each reflects an aspect of Paul’s theology throughout the full letter. Twenty years later, Schreiner has reworked his commentary, changing his mind on a few bigger issues and on numerous smaller issues.

As stated above, Schreiner has changed his view on a few key issues.

But, besides these, Schreiner has changed his interpretations on much smaller points too. In Romans 6.5, he once took ἐσόμεθα as a genuine (or “predictive”) future (“we shall be united in the likeness of his resurrection”), but now takes it as a logical future (“we are united in the likeness of his resurrection”). The first sees Paul telling the Roman believers to live holy lives because they have been and shall be united with Christ in his resurrection life. The latter understands Paul’s command to be based in the fact that Christ’s death and resurrection presently affects our lives. Schreiner says, “Those who are baptized (i.e., converted) experience the impact of Christ’s death and resurrection in their present existence” (314). Ultimately, Schreiner’s argument in both commentaries revolves around the now-and-not-yet concept of God’s salvation, but this new edition bears the fruit of twenty years of thinking on Paul.

More briefly, in his first edition Schreiner understood “law” in Romans 7.21 and 23 to refer to the Mosaic law (376), but he now understands it to mean something akin to “principle” (375).

Being written twenty years later means that Schreiner’s bibliography has been revamped. It is now 76 pages long and has been updated to 2016, with the exception of Timmins’ work (2017), Peterson’s Romans commentary (2017), and Thielman’s forthcoming Romans commentary (2018). In some places that means that Schreiner’s arguments are updated; in other places it means that Schreiner’s arguments remain the same but notes with whom he does or does not agree. That means that if you’ve read Thiessen’s Paul and the Gentiles, you can see that Schreiner disagrees with Thiessen’s view that Paul in Romans 2.17 is speaking of Gentiles who see themselves as Jews. He agrees with Caneday (2.15), who is partially the reason for Schreiner’s change of view on this passage. He disagrees with Jipp on Romans 1.17 (70n20), but agrees with him that we are sons who are comparable to the Son in 8.15. I could go on, but basically—Schreiner has reworked his commentary, updated much… and has read a lot.

Much is still the same here. It’s not as if every paragraph has been reworded. But things have been changed, even if only in a minor way.

The section on Romans 8.5–11 has also been expanded, and verse headings have been added in the margins. In the same section in Romans 1.0, there were no verse headings in the margins. If you were looking specifically for Romans 8.9, you would have to search through all of the paragraphs in that section. Now it is much easier to find the discussion on that verse. Only a few sections are like this (cf. Rom 1.1-5; 8.35–39). Margin verse headings are left behind in those smaller sections (1.1-5; 11.26-27) so that Schreiner can better group his discussions together, but this is rare.

Many of the additional notes (see that of 5:1) have been expanded; the font has been changed, decreased, and put into bold.

There’s really not much to complain about with this volume. Overall, it’s much more pleasing to the eye in terms of font size, style, and layout. No one will agree with all of Schreiner’s interpretations, and there are some matters that I still have questions about, which I’ve noted in my posts below.

Due to his brevity in some places (or because of my own ineptitude) I don’t understand some of Schreiner’s arguments that God’s righteousness is to be understood only forensically (read my third point on it being a gift from God along with my conclusion here). Neither have I quite figured out his interpretation of 2.15 with the “accusing and excusing thoughts” of gentiles believers and how they are two different groups (believing and non-believing gentiles- see here too).

But those are minor issues. The text as a whole is very readable, though academic. And really, no one should rely on one commentary alone but on a few (such as Moo, Longenecker, Jewett) alongside one’s own study.

Certainly scholars will want to pick this up again for Schreiner’s changed positions, his updated nuances, and the additional bibliographic entries. But what about pastors and teachers who already have the first edition? At the risk of being rebuked by Michael Bird, if you have the first edition and you aren’t sure if you should get the second, just sell the first and buy the second (unless your loved one lets you keep both). Arguments are tightened, reworked, and carefully thought through again. The commentary is large, but it is shorter than other Romans commentaries, especially the multi-volumes.

Schreiner’s volume is perfect for examining the flow of thought along with other interpretive and exegetical matters. But for all that allotted space, other matters must be left for other commentators. I may not be given the details of a particular word, but I at least understand how it is used in Paul’s flow of thought. Schreiner has published a plethora of works since his first edition, and as a result he has sharpened his thinking on numerous matters. This comes highly recommended.

Buy it on Amazon