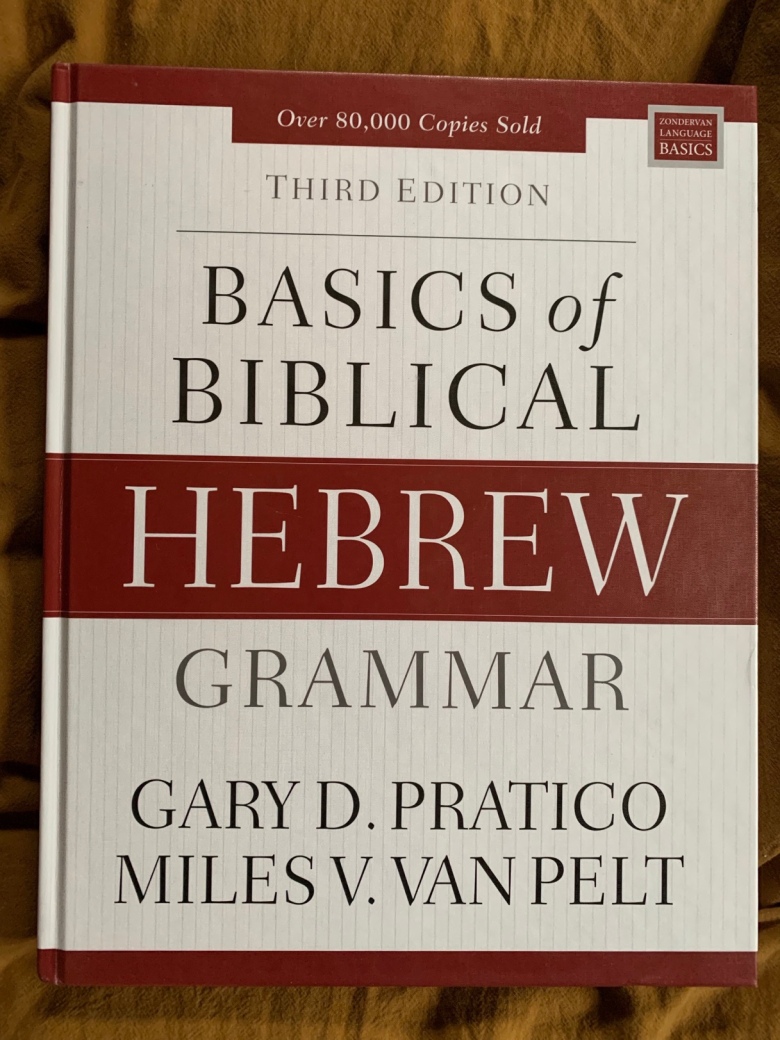 As I’m sure I’ve written before, when I took Hebrew with Peter Gentry at Southern we used Allen Ross’s Hebrew grammar. I thought the book was laid out and explained well. I used Animated Hebrew for extra help with a few parts I didn’t understand (like the way consecutive). [This guy has a good playlist going through Ross’ book as well.] Before the semester I watched the Hebrew I videos by Miles Van Pelt from Zondervan’s Online Lectures series. During the semester, I worked through Gary Pratico and Miles Van Pelt’s second edition of Basics of Biblical Hebrew (BBH from now on). Though I’ve been recommended not to try to work with a different grammar when you’re beginning with Hebrew, I found that Pratico and Van Pelt’s grammar really complimented Ross’s; it really helped me to learn Hebrew.

Ever since graduating Southern I’ve been wondering how I’ll get back into Hebrew. There’s a lot I’ve forgotten, and I don’t have as much time to work with it as I used to. But going through this third edition has been a real encouragement to me. Though I don’t have the workbook (which has been completely revised), the authors break down the information and explain it simply. I will first talk about this grammar and why I like it, then I’ll tell you what’s new and make some comparisons with the second edition.

The authors begin with the Hebrew alphabet before moving to nouns, particles, the waw conjunction, adjectives, pronouns, pronominal suffixes, and the like. All of this is covered in 11 chapters. The next 24 chapters cover verbs (besides two chapters on the way consecutive and on sentence syntax). You are introduced to the Qal verb first as it is the basic verbal stem. You meet the perfect strong verbs first, and then you meet the weak verbs and all of their irregularities. Then you do it all again with the Qal imperfect strong and weak verbs. Then you move on to the Qal imperative, infinitive construct, infinitive absolute, and the participle. All of that prepares you “to identify 69 percent of all verbal forms in the Hebrew Bible” (264). Afterwards you will learn about the twelve derived verbal stems (verbal stems which are… yes… derived from the Qal stem). Chapter 36 helps you to understand what you’re going to see when you open up your Hebrew Bible. After this the book ends with charts and a Hebrew Lexicon.

This book is BIG. I have the 2nd ed. on Logos so I didn’t realize how big it was, but it’s big. The font is large, making the Hebrew font easier to read. As you learn about vowels, suffixes and prefixes, particles, changes in the weak verbs, and other things, the authors use a red font to show you what is different or new. This is perfect as this is what I did when I took Hebrew—make the differences stand out.

Throughout the book they continually point you back to the basics. In chapter one you learn about the so called begadkephat letters (a mnemonic device for remembering six Hebrew consonants that have two possible pronunciations. Those six letters are בגדכפת, and to distinguish between the two pronunciations, a dot (called a Daghesh Lene, or DL) was placed in the letter: בּגּדּכּפּתּ. If the begahkephat letter is preceded by a vowel/open syllable, then it will lose its Daghesh Lene. Well, the Hebrew language is full of dots and it can be pretty easy to forget what kind of dot is on the page or inside a letter and why it is (or isn’t) there. So I appreciate the small reminders like in chapter 10—the Hebrew Construct Chain. In the section Construct Nouns with Inseparable Prepositions (10.2.5), there is this example: בְּבֵית דָוִד = “in the house of David.” The authors provide a helpful clue on the missing Daghesh Lene, “Note the loss of the Daghesh Lene in the second ב of בְּבֵית [and in another example] because these begadkephat consonants are now preceded by an open syllable” (95).

That was a lot to write for one little comment, but those small comments help! Again, the Hebrew language is full of dots, and sometimes you can pull your hair out trying to figure out why a dot is or isn’t there. And when you don’t have a teacher in front of you to ask, comments like these are gold.

Chapters end with a summary and a section on vocabulary for verbs, nouns, and “other” words. They may have a section on additional information (such as the Particle הִנֵּה in chapter 10). This is then followed by a new-ish section called Something You Should Know, Consider, or Memorize. Many of these were interesting and I hope to write about a few of them. They offer theological thoughts from the meanings of tricky Hebrew words, syntax, and other things.

The authors write in the Preface what is updated in the third edition:

Chapters 10, 18, and 23 have been reworked. Chapter 23 deals with sentence syntax, an easily confusing subject because it is different from English syntax. After a short discussion with examples of the syntax of the verb (23.2)—verb often appears first in a sentence/clause—the authors move to the syntax of the subject (23.3) and then that of the object (23.4). After this is a section titled “Additional Clause Components” (23.5). This section looks at how different components (such as an adverb/adverbial phrase, personal pronoun, a negative particle, and more) can come before a verb in the sentence/clause. That this information gets its own section is helpful. In the second edition this information came in section 23.2, right when you learn about the syntax of a verb. Since that can be overwhelming to learn right away, that extra information has been moved to its own section, allowing you some breathing room as you move from short section to short section.

From what I saw with chapters 10, 18, and 23, sections have been moved around, sometimes examples from the second edition have been deleted, clarifying sentences have been added throughout the chapters. I didn’t get the sense that these three chapters were “significantly rewritten” at all, but they have certainly been updated to teach the information more clearly.

I love BBH. I haven’t worked through very many grammars, but for what it’s worth I think BBH is fantastic. You will want to purchase the workbook to use alongside the grammar. I will say this: if you have the second edition, there is no need to buy the third. You can read more about the verbless clause in books like Basics of Hebrew Discourse). However, if you don’t have any edition, BBH is really handy to have. As I wrote above, I’ve been wondering how I could get back into Hebrew. As I’ve looked through this updated edition, I’m not worried anymore about how I’ll do it. Highly recommended.

Buy it on Amazon or from Zondervan Academic

Buy the workbook on Amazon or from Zondervan Academic