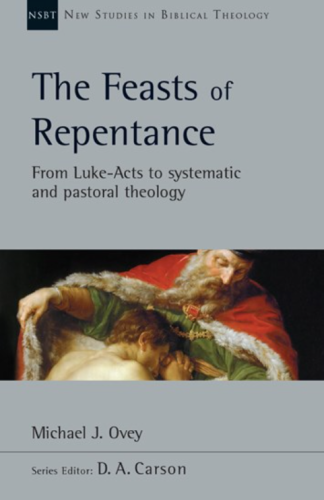 Michael Ovey served as the principal of Oak Hill College, London, from 2007 until his death in 2017. This book began as a series of lectures for the Annual Moore College Lectures in Sydney, Australia in 2008. Mike reworked these lectures, and after his death, principal of Moore College Mark Thompson did the final minor edits so that Ovey’s lectures could become this book.

Michael Ovey surveys the scenes of feasts in Luke and Acts, looks at repentance through those characters who do repent and turn away from their sin and those who do not repent. Ovey shows how repentance connects to both systematic and pastoral theology. Evangelicalism today (and in all times) needs repentance. It is part of the evangelistic message and of the normal Christian life. Christians still sin after they put their faith in Jesus, and they need to repent, turn away from their sin, and turn toward Jesus. Both John the Baptist and Jesus emphasized repentance (Luke 3:1-17; 24:47), and it is found in both Peter’s speeches to the Jews (Acts 2:38) and Paul’s speeches to the Gentiles in Acts (14:15; 17:30).

But what is repentance? The idea of “change of mind” (metanoia) and “turning” (epistrephein) are “closely intertwined” in Paul’s speech to Agrippa in Acts 26:17-20, specifically v. 20. The two words Paul uses have significant overlap as seen throughout Luke-Acts. Ovey is clearly aware of the narrative structure of Luke-Acts, giving a “dynamic movement” in how repentance is taught through it’s characters and setting (4). In Luke-Acts, “theological argument is carried on in subtler ways [than bare straightforward logical argument] and in more dimensions than the argument of a systematic textbook” (4). Ovey argues that Luke wants to “persuade his reader” as the reader “witnesses the interactions between Jesus and other characters” (5). These characters and how they “respond function as paradigms, for better or for worse” (5).

On top of this, how would the Jews call Gentiles to repent? Repent of what? They were never under God’s law. They weren’t expelled from their countries for breaking God’s covenants. Of what is it that Gentiles need to repent? What Ovey argues for is that Luke shows how everyone needs to repent, both the seemingly faithful (like the Pharisees) and the apparently unfaithful (the tax collectors and sinners). In Acts, The Jews must repent for complicity in Jesus’ murder, and the Gentiles must repent for their idolatry against the only God.

In chapters two and three we see repentance in Luke (ch. 2) and Acts (ch. 3). Both chapters are thick with content, but chapter two is especially full. After John the baptist calls for repentance, Jesus continues that call in 5:32. Ovey focuses on material from Luke 5:1 to 19:10, “from the call of the first disciples to the encounter with Zacchaeus, shortly after which Jesus goes on to Jerusalem (19:28) and his passion” (12). Ovey examines the feasts in which Jesus participates:

Ovey relates feasting with repentance, joy, and bearing fruit. Yet some who are at feasts, the Pharisees, who neither repent nor think they need to. Early in the Gospel of Luke they seem good enough, but as the story goes on we see them for who they really are. They are greedy, envious, and not given over to joy when a sinner repents.

In chapter four, idolatry is a parody of our relationship to God where we resemble those things that we revere and honor (and worship). Those outside of a covenant with God are idolators for they, as God’s creatures, put their hope into something—anything—else than God himself, and in doing so disobey his commands.

In chapter five, Ovey examines the logical relationship between faith and repentance and thus the ordo salutis (order of salvation). Often the order is something like Election -> Call -> Regeneration -> Faith -> Justification. But Ovey argues that “an account of faith is defective if it has been so constructed as to rule out repentance” (130). Repentance needs to be with Faith. A call to faith in Jesus needs to leave open the call to repentance, even if that repentance occurs at a later time. The pastoral implications are that a lack of repentance leads to a lack of self-understanding. We don’t see ourselves as people who have turned away from God to idols that stand in darkness. It causes a lack of love towards God. We become more prideful for we are doing nothing wrong, and we can become less appreciative of the amazing mercy God grants to us. It also causes a lack of charity towards our neighbor, something looked at in the final chapter.

Chapter six, Luke shows us that to be unrepentant shapes us into being self-righteous and prideful hypocrites, but the repentant are humble and forgive others as God forgives them. Our very identity as God’s sons and daughters is shaped by the gospel. The Creator is “justly angry at his creatures’ rebellion but” he also offers “forgiveness in his mercy” (156). Repentance frees us from idolatry’s power over us as we leave behind those blind and deaf idols and draw near to the living God.

This is a book you need to pick up. It is more than just narrative analysis in Luke and Acts, but Ovey skillfully brings in systematics and pastoral application to you and those around you. This is really an impressive book that helps give a glimpse at the depths of how the Bible is living and active, how the gospel works in every part of our lives, not as a form of legalism, but showing that it is not something trivial. The gospel works, and it frees us from what is dead, dark, and sinful and brings us to Christ himself.

Buy it on Amazon or from IVP Academic!