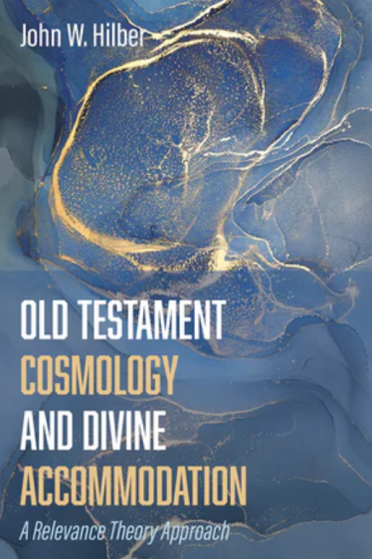 When we read the Bible, we can see that there are certain discrepancies between what the Bible says about how the world/universe works and what we know about our universe today. Is there actually a firmament? Is there a solid dome surrounding the world with water above it? John Hilber, Professor of Old Testament at Grand Rapids Theological Seminary, has written a book to help us understand how God spoke through the authors of the Old Testament in ways that they understood, specifically when it comes to how they understood the physical world and universe.

John Hilber started out his academic career as a geology major at the University of Washington, but later went to seminary, became a pastor, and then got his PhD in Old Testament and Ancient Near Eastern Studies. He taught first at Dallas Seminary before heading to to Grand Rapids Theological Seminary. Though his book is quite heavy to read (especially if you know little about relevance theory and speech-act theory), he has been a pastor before so he understands the practical implications of his topic and how understanding the Bible better helps our faith.

Hilber aims to help you understand what it means that the Bible has dual-authorship. He writes, “It is the particular strength of relevance theory to evaluate how language engages the broader context of ideas and assumptions in the cognitive environment of speakers and listeners, or authors and readers,” which leads to “how the Old Testament relates to the cosmological ideas of ancient Israel” (xii). Hilber believes we need to understand the original cultural context to understand the meaning of texts like Genesis 1. This involves understand how ancient Near Easterners conceived of the world around them. What was their “mental model”? What do you think of when you think about the world, the atmosphere, outer space, and the universe? It’s going to be different than what the ancient person thought of. This isn’t a bad thing, and it doesn’t mean that the OT is irrelevant when it speaks about cosmological concepts (such as the sun “rising” or water above the firmament).

Chapter One gives an introduction to relevance theory (read more on Wikipedia), cognitive linguistics, and how “relevance” works in communication. Essentially, communication is meant to be “optimal” (12). When you meet up with your friends, you don’t give them a list of random trivia facts for three hours. They would feel that was random and might think they wasted their time with you. You would be placing a burden on them; they would be thinking the entire time, “Why is he spewing random facts at us? How is this relevant to me?” When we talk to people, we try to make communication easy for them (some people are better at this than others).

“Relevance theory helps us think about what elements of the cognitive environment contribute to correct interpretation.” (15-16)

Chapter Two assesses the OT cognitive environment, that is, “anything the audience [was] capable of being aware of” (10). Concerning cosmology, what were ancient Near Easterners aware of? Did they understand that the earth revolved around the sun? No. Hilber looks at a few ways moderns have tried to depict how pre-moderns understood the world to look as well as how other prescientific (but closer to our modern age) people understood the world to look and function. Israel likely believed in a three-tiered universe: heaven/sky-earth-sea/abyss, that the earth was flat, and that it was surrounded by water above the atmosphere (as we know it).

Chapter Three surveys the belief that God accommodated himself to the biblical authors held by early church fathers (e.g., Augustine), the medieval and renaissance period (e.g., Erasmus), others after the Reformation and the emerging of literal interpretation (Luther, Calvin, Socinus, René Descartes, Spinoza), and 19th century conservatives (e.g., Charles Hodge, Archibald Hodge, B. B. Warfield, William G. T. Shedd), and in the late 20th and 21st centuries (e.g., Jack Rogers and Donald McKim). Men like Luther and Calvin believed Scripture was not intended to teach us science, and they used accommodation “to relieve Scripture of that task” (123). Church fathers understood accommodation “in pedagogical terms and described the manner by which God adapted his message of salvation to limited human understanding” (124).

In Chapter Four, Hilber examines how meaning can be inferred through contextual assumptions and how dual authorship of the Bible works with inspiration and meaning. The beginning of this chapter is dense, but if you are familiar with speech-act theory or with relevance theory at all then you should be able to hang on to the conversation (like when Hilber writes about explicated and implicated meanings, and implicit versus explicated and implicated assumptions). 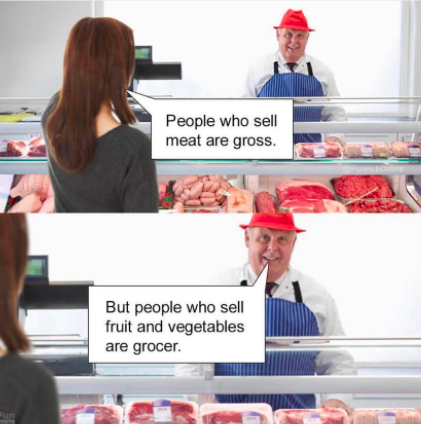 Tomatoes are a fruit, yet in your grocery store’s produce aisle, they are placed among the vegetables. Is the grocer a fool? Deceptive? Evil? Not at all. As Hilber clarifies, the grocer “accommodates shoppers who naturally group tomatoes with other vegetables, even if it is actually a fruit. Even for the informed, the produce manager is merely organizing the food stock by adapting to culinary interests rather than by adhering to strict botanical categories. The grocer’s organization draws on the most accessible assumptions linked to a grocery shopper’s expectations of relevance” (139).

If we carry this image over to the Bible’s dual authorship, God is the produce manager who “guides the stockperson (Scripture’s human author) to place tomatoes for the shoppers (Scripture’s audience) in the vegetable section” (139). The information the produce manager is giving is not botanical information. Placing tomatoes with vegetables in a grocery store is different than doing that in a botanical museum because “in a botanical museum, visitors expect scientific truthfulness to be relevant” (140). How does this play out in the Bible? I’ll give one example:

King Saul has rebelled against God and no longer hears from him. He goes to a witch in Endor to get an answer to his question from the dead prophet Samuel. The author of 1 Samuel tells us the witch says, “I see a divine being coming up from the earth” (1 Sam 28:13). There is a contextual assumption and a conclusion:

The witch saw Samuel come up from the ground, and this freaked her out. Does that mean Sheol is under the ground? It actually doesn’t matter. Both the witch and Saul “interpreted the encounter as authentic… because it met their expectations about what a return from the dead looks like” (144). That is, if ol’ ghost Samuel had come from the sky, the witch’s first response would have been confusion (or holy terror mixed with confusion). Samuel would then have to explain that the realm of the dead is actually not under the ground, which would confuse them more because they believe that’s where it is. (Maybe they would feel like they were on an episode of Punk’d?) Instead, Samuel comes up from the ground. There is no confusion here. The witch, and thus Saul and the readers, immediately knows what this means: “the prophet Samuel indeed returned from the dead to deliver a message of doom to Saul” (144).

In Chapter Five, Hilber looks at different examples from Genesis 1 and the OT, as well as how some OT texts interpret Genesis 1, texts from Isaiah, Jeremiah, Ezekiel, Daniel, Hosea, Amos, Zephaniah, and the psalms. Hilber then asks if creation ex nihilo (creation out of nothing) is implicit in Genesis 1:2. He agrees that is is by looking at how the concept shows up in Isaiah, Proverbs, and the Psalms.

This is a really interesting book for those wanting to go deeper into hermeneutics, especially along the lines of speech-act theory. It is something that should be considered by teachers and professors when it comes to hermeneutics and such courses. I hope Hilber can write more on this topic in the future, hopefully in more accessible prose for a wider audience. I really enjoyed his points and biblical examples, but the explanations of relevance theory were hard to wrap my mind around. Anyway, if you’ve read a lot of hermeneutics and want to go deeper, especially into the OT, pick this one up. Hilber really brings an important and helpful theory to the table of biblical interpretation.

Find it on Amazon and Cascade Books!

Disclosure: I received this book free from Wipf and Stock. The opinions I have expressed are my own, and I was not required to write a positive review. I am disclosing this in accordance with the Federal Trade Commission’s 16 CFR, Part 255 http://www.access.gpo.gov/nara/cfr/waisidx_03/16cfr255_03.html.