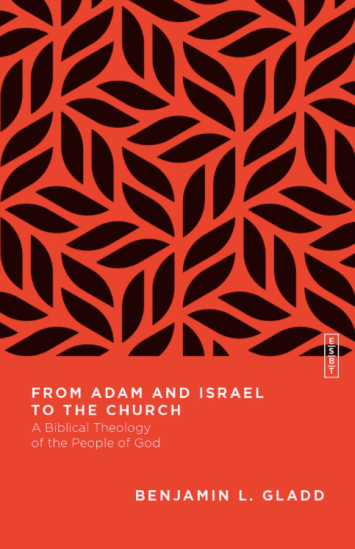 Benjamin Gladd, associate professor of New Testament at RTS and editor of this new series, writes from the standpoint as a covenant theologian. Though I disagree with him on some points, I think he makes a good overall argument for defining who the people of God are in the Bible. Gladd was at one time a dispensationalist (like myself), but when he went to grad school he learned that “Israel and the church were not separate but were unified in the person of Christ. Jesus of Nazareth is the true Israel of God, who reconstituted the people of God in himself. So, the church, composed of believing Jews and Gentiles, is the restored people of God, true Israel, because of their identification with him” (xi).

Gladd’s main concern “is to examine the nature of the people of God from Genesis to Revelation through the lens of being in God’s ‘image'” (4). I personally found this exciting because I wrote a paper back in seminary on the image of God, and it is encouraging to see how the “image” them runs throughout both testaments.

This is the first volume in a 10-book series called the Essential Studies in Biblical Theology (ESBT) series. Each book looks at an aspect of God’s plan of redemption in the Bible. Each book is meant to be a primer, accessible to all people, introducing people to a particular biblical theme while tying it to how we live and minister as Christians and how we view the world God made.

Without going through every chapter, Gladd begins with God creating. The universe, and Eden, specifically, was a temple. God’s temple. In Eden God made himself present to Adam and Eve. Adam and Eve were God’s imagers. Being the first people on earth, they were kings and queens meant to rule with justice and righteousness, just as God the king rules. As God’s prophets, they would proclaim his law (“don’t eat of the tree of the knowledge of good and evil,” Gen 2:17), and tell all (aka, their children and so on) about God’s goodness and his character. As God’s temple priests, they would keep his law (Gen 2:17) and make sure that their children (and so on) kept the law too. As well, they would tend and keep the garden, just as future priests guarded and kept up with the temple. They would protect it from unclean invaders (like… the snake, Lev 11:42) and expand the garden.

The garden of Eden was in one location. Adam and Eve were to be fruitful and multiply, having children, telling them about God’s goodness, and expanding the garden so that more and more of the earth would be put in order and his presence and glory would expand over all the earth. We see this original intention in Habakkuk 2:14, “For the earth will be filled with the knowledge of the glory of the Lord as the waters cover the sea.” But Adam and Eve, as God’s imagers, failed to rule well. Instead, they were ruled by the unclean serpent, a created creature of the ground. Despite the fall, people still image God (Gen 5:1-2).

A covenant is made with Adam, Noah, and then Abraham. God would bless the world through Abraham and God would multiply Abraham, Isaac, and Jacob. Jacob has twelve sons who become very fruitful in Egypt (Exod 1:7), and when God rescues Israel out of Egypt he brings them to Sinai and makes a covenant with them as his people. He tells Moses in Exodus 4:22 that they are his “firstborn son.” Sons represent their fathers. Like Adam and Eve, Israel will have a kingly, priestly, and prophetic role as they image God their Father. They were to proclaim God with their actions and words, but instead they showed off their idols by becoming like their idols: deaf, blind, and mute (Ps 135:15-18). Israel became like their idols, empty, merciless, and unjust. They let the enemy in, so God had to send them out of the land to Babylon.

If you’re wondering about how God’s people run through the Bible, this is a good book to pick up. Dispensationalists will disagree, but Gladd makes a good case for his view. I have a few quibbles (like the “covenant of works”), but for the most part I though Gladd did a great job. There were a few places in the book where I felt a little lost. Chapter 4, “Israel’s Restoration in the Latter Days,” is a great chapter, and it examines how the OT pointed to the future and how God would fill the earth with his people and dwell with them. At the same time, it was very easy for me to get lost in the weeds and wonder how this related to imaging God. Much of this was reminiscent to G. K. Beale massive work on the temple. However, even though I’ve read it, I was still marking up Gladd’s book and making notes in my Bible.

Humanity, specifically, is God’s crown of creation. We image God to one another. We do it not by looking like him, but representing his love, mercy, and generosity (and more!) through our actions and words (and thoughts and motives). Glad superbly shows how Christians fit within God’s story as God’s imagers to the world around us.

Buy it from Amazon or IVP Academic!