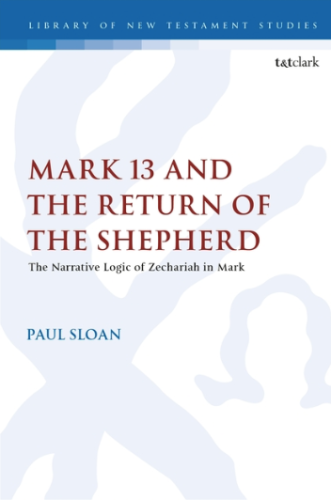 24 “But in those days, after that tribulation, the sun will be darkened, and the moon will not give its light, 25 and the stars will be falling from heaven, and the powers in the heavens will be shaken. 26 And then they will see the Son of Man coming in clouds with great power and glory. 27 And then he will send out the angels and gather his elect from the four winds, from the ends of the earth to the ends of heaven.

For anyone who has ever studied Mark’s Gospel, Mark 13 is not easy. Does this occur “in those days” of the tribulation? How is it “after that tribulation”? Is that a worldwide tribulation or just in Judea? Do the stars literal fall, or does it speak figuratively of failing government powers? Does Jesus actually return, or is this also speaking figuratively of the vindication of his prophecy that the temple would be destroyed? In fact, if Jesus isn’t speaking about the destruction of the temple here, why does he mention the coming of the Son of Man at all? What does it have to do with the disciples’ question about the sign of the temple’s destruction?

As Paul Sloan, Assistant Professor of Theology at Houston Baptist University, points out, all interpreters come to a crossroad right at the beginning of Mark 13 (verse 3, really). He writes,

“Thus a major conundrum created by the Olivet Discourse is, why does it begin with a prophecy and question about the destruction of the temple and end with a statement about ‘the coming of the Son of Man’? How do those events relate?” (2).

Sloan compares Mark 13 with Zechariah 13-14 because he believes Zechariah clears up an impasse that has confounded scholars for 150 years.

Chapter One: Shape of the Question.

Sloan then gives his methodology and a short history of research on Mark 13. To come to his position, Sloan employs Stefan Alkier’s “semiotic exegesis,” which means he examines Mark’s “intratextual,” “intertextual,” and “extratextual” relationships.

Intratextual data: all of the relationships within Mark’s Gospel, such as Mark’s syntax, vocabulary, plot, and his repetition of phrases and events.

Intertextual data: this one is difficult to describe simply, so I’m just going to say that this is a study of the other texts Mark uses (such as Zechariah).

Extratextual data: includes elements that are outside of the literary texts, such as geography, social-cultural conditions, people’s daily behavior, architecture, archaeology, and more.

Sloan shows how other texts have used Zechariah in ways similar to what we find in Mark 13. Those texts are:

Sloan writes that at the Last Supper, Jesus says that the cup of wine represents his “blood of the covenant” (Mark 14:24). Language of “blood” and “covenant” is only used in Exod 24:8 and Zech 9:11. In Exod 24, the blood is sprinkled on the Israelites to show that they are included in the covenant. Zech 9:11, referring of that very covenant, speaks of the Lord setting Zion’s prisoners free. The Hebrew word for “free” is used throughout Exodus 3-10 “to refer to the ‘freeing’ of God’s people from Egypt” (68). There will be yet another exodus event.

This leads to the relationship between Zech 9-14 and Isa 40-55. Both Isaiah and Zechariah present royal figures “described as ‘afflicted,’ ‘stricken,’ and ‘righteous.'” Are these figures two people or one? Mark combines them when he describes Jesus as “the Davidic King of Zech 9:9, the suffering servant of Isa 53:12, and the stricken shepherd of Zechariah 13:7” (68).

He deftly shows how “Mark displays… prophecy narrated, rather than prophecy repeated” (86). Matthew often says something like, “This was done to fulfill Scripture, which says X.” Mark’s narrative is the fulfillment of OT prophecies, which we see through key words, places, and actions done by Jesus and others. Sloan says, “Mark artfully crafts the narration in such a way that the accounts simply exhale the scriptures upon which they are based” (86).

The events of Mark 13 take place after Jesus’ leaves the earth (Mk 13:34) and before his return to earth where he will be “coming in clouds” (13:26).  Sloan remarks, “Those events therefore constitute ‘bookends’ of the material in Mark 13” (89). Sloan believes Mark narrates these events (Jesus departure and return) “with a citation and allusion to Zech 13:7 and 14:5 respectively” (89, as I noted above).

When the Shepherd is struck, the disciples will fall away (14:27). Sloan understands that when the striking occurs, the disciples’ fleeing does not fulfill Zechariah 13:8-9. They are merely the first steps in a sequence, “after which comes the refinement of God’s people” as seen in the attack on Jerusalem in Zechariah 14 (p. 91). Both Mark 4:17 and 9:42-49 speak of falling away/causing to sin. Since being led into sin can cause one to fall away from the gospel, Jesus’ disciples (“little ones”) need to be on guard against temptations because “everyone will be salted with fire” (v. 49). Looking to Leviticus 2:13, disciples of Jesus will be like offerings put through the fire (persecution) as (self-)sacrifices to God, ultimately being purified and transformed. Zech 13:7-9 speaks of “little ones,” “fire,” and refinement. Mark 13:9-13 elaborates on what that “refinement” process will look like after Jesus is gone.

Sloan argue that Mark depicts Jesus’ departure and return by citing and alluding to Zechariah. These events are both found in Mark 13. Jesus must be away (Mk 13:34) for the events in Mark 13 to happen (such as false christs saying “I am he” to lead people astray (v. 6); the fact that the disciples will have the Holy Spirit in v. 11), but he will return to save his people (vv. 26-27).

Sloan presents the four most “commonly attested positions” in scholarship as to the meaning of Mark 13. Is Jesus speaking only about the temple? the tribulation and Jesus’ return? the temple and Christ’s return? Or is Mark just being intentionally ambiguous as to what Jesus really means?

Chapter Six: Mark 13 and the Return of the Shepherd.

Here, Sloan goes through each section/paragraph of Mark 13, both explaining the text and its interwoven connections to Zechariah 13-14. Even the fact that Jesus and his disciples stand on the “Mount of Olives” opposite the temple refers to Zechariah 14:4, the only reference to the “Mount of Olives” in the Old Testament, occurring twice in this verse. (The phrase occurs in 2 Sam 15:30 in our English translations, but the wording is different in Hebrew, being instead “the ascent of Olives.”) This is to alert the reader to the oncoming use of Zechariah 13-14 in Mark 13. The disciples ask when the timing of the temple’s destruction will be, though their question  contains references to Theodotian’s Greek version of Daniel 12.

Verses 5-13 constitute events that will happen that are not signs of the coming end, but the disciples must endure and persevere. If they persevere to the end, perhaps even through martyrdom, they will be saved. They have laid down their lives to receive what they can never lose (Mark 8:35). Verses 14-23 answer the disciples request for a “sign”: it is the abomination of desolation. In the previous section, the disciples were to endure whatever came their way. Once the AoD arrives, all are to flee. He/it will not destroy the temple, but reveals its impending destruction.

Sloan ends with stating how important Zechariah’s role is within Mark. Jesus is “the awaited, by unexpected, Davidic king” (215). His actions as king do not match what the disciples (or anyone else) expected.

Jesus defeats the enemies of God’s people, for example, but he identifies the enemies as Satan and the unclean spirit (Zech. 3:2; 13:2). He teaches the nearness of God’s kingdom (Zech. 14:9), but his welcome includes all the nations (Zech. 14:16, 21). He claims to be Israel’s king, but his kingship entails pouring out his own blood of the covenant (Zech. 9:11), and being stricken by God (Zech. 13:7). The latter is not a repudiation of kingship, but it is a redrawing, or a new figuration, of what being king entails (215).

He provides two tables of Mark’s use of Zechariah, one with his allusions outside of Mark 13 and one with all of the allusions within Mark 13. Sloan looks at two ancient Christian texts which refer to the Olivet Discourse: Didache 16 and Cyril of Alexandria to show that early readers made the same connections with the same texts.

Sloan shows incisively why Jesus elaborates on “the persecution of the disciples, the attack on Jerusalem, and the parousia” in one discourse in Mark 13 (213). Zechariah 13-14 provides the framework within which Jesus spoke. Sloan shows that the NT can refer to the OT without referencing specific words. Instead, correspondences between texts can be found in similar actions, series of actions, and themes. Many scholars know this, but Sloan shows that having a keen eye, a good knowledge of the languages, and a healthy dose of creative thinking, one can see the OT foundation in the NT. Such work pays off, as at least to me Sloan’s argument makes very good sense. He has presented one example of how the NT stands on and with the OT to present Christ as king.

For anyone to throw out the OT would be detrimental to their faith. Scholars and teachers (who can afford this volume) would greatly benefit from Sloan’s proposal. I hope this will lead other scholars to take on his arguments and answer other puzzling questions, such as to whom Paul refers when he speaks of the “abomination of desolation/man of lawlessness” in 2 Thessalonians 2:3. Is Zechariah 13-14 in the background of Paul’s text too? Is his temple appearance the same or a different event to which Jesus referred?

If your interests lie in Mark, you should consider picking up Sloan’s book. It’s one that I am surely happy to have.

Buy it on Amazon or T&T Clark!

Disclosure: I received this book free from T&T Clark. The opinions I have expressed are my own, and I was not required to write a positive review. I am disclosing this in accordance with the Federal Trade Commission’s 16 CFR, Part 255 http://www.access.gpo.gov/nara/cfr/waisidx_03/16cfr255_03.html.