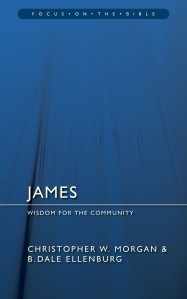 James, a favourite among many, is a hugely practical book. And at the same time, it is a very difficult book to understand. How does one resist the devil and make him flee? When I ask for wisdom, how do I know I do it with the right heart? How do I know when I’ve received it? Am I saved by works? Do I know the right thing to do, yet fail to do it?

Written in a combined effort by Christopher Morgan (co-editor of the Theology in Community series) and Dale Ellenburg (Pastor of Dotson Memorial Baptist Church, Maryville, TN), they have sought to exegete and apply the text by bringing, as the subtitle says, wisdom to the community.

To be honest, I haven’t read a lot of James commentaries. I had James as a 1 credit class back in Siegen, DE, and I’ve twice taught on James 4.11-17, once at CCBCY in another James class and once at my church back home. I did receive Moo’s James (PNTC) commentary this Christmas, but I haven’t really had the chance to go through much of it yet. So this commentary is a first for me to go through, and I can say I have enjoyed its insights. A few of them I will post below (and also to give you an idea of some of their perspectives on different texts):

I’ve always had difficulty discerning what exactly went on in this passage, especially when most of the more literal translations (ESV, KNJV, NASB, NIV) show the man looking at or observing himself in both verses 23 and 24. If this man is observing himself in a mirror, how can he so easily forget what he has just seen? Yet Ellenburg tells us James switches the verb tense of ‘looking’ from verses 23 to 24, so that ‘looking’ becomes ‘glancing.’ He glances at himself, and forgets what he saw (especially considering that “[a]ncient mirrors were made of polished metals” [82]). But he who gazes into the perfect law, seeing and allowing the light of God’s word point out the inconsistencies in one’s life, will be changed. He will persevere. He will not only hear, but do and act. His religion will be pure and undefiled.

What is the ‘Law of liberty’? Ellenburg says, “…[W]e have been set free to do as we ought; we have a new power within to obey Christ that we did not possess before” (100).

James, like Paul, “looks upon works as proof of faith, not as a means of salvation” (105). James and Paul were combating different opponents, not each other. Paul aimed for salvation through faith, not through the law. James goes against those in the church who have a “wordy but worthless faith” (105). They speak as if they have a well-deserved righteousness, but act as the demons do. James is telling them that “Abraham’s faith [2.23] was not an idle, passive matter” (111). Abraham is called a ‘friend of God’, “a designation used only after Abraham demonstrated his willingness to obey God” (112). It will be later (4.3-4) where James says that the only ‘friendship’ that some in his church participate in is with the world, which, unlike Abraham, puts them at odds with God.

Of three positions, Ellenburg takes ‘the spirit’ in 4.5 to be our spirit, translating the verse to mean, “Or do you suppose that the Scripture says, ‘the spirit which [God] made to dwell in us yearns enviously’?” The “spirit imparted [by God] at creation longs perversely for the enjoyment of worldly pleasures” (149). God gives more grace (4.6) so that we can overcome our sinful desires and follow him.

James’ text is terse and ambiguous, with many teachers and scholars left scratching their heads. Ellenburg concludes that, because this text is short and ambiguous, the use of oil isn’t “universally applicable or perpetually binding” (196). He gives the reader four different views on this verse:

Ellenburg advocates for the last view (though gives weight to the third view). He says the elders, as brothers in Christ, are doing what they can to aid in the healing of the wound in this (more) “primitive” time when hospitals were not around the corner

The final section of the book was titled the Theology of James, giving thought to many of the themes seen in this short epistle. It ties together the book of James by bringing together its related themes and scriptures, along with relevant OT scripture, into one place. Wisdom is taking God’s ways and applying them to one’s daily walk, showing us all how to love our God with all of our heart(s), soul(s), mind(s), and strength(s) together as a community. The lists include topics such as:

The authors are very community-centered, and they challenge the readers to edify and build up the church body to live according to God’s commands. Each believer has a responsibility to live in a way that reflects God’s Word and brings about the edification of the body. The authors encourage the Christian(s) to do that, and they do so in accessible language so even those who are unfamiliar with deep theology can understand how they are apart of a family and the responsibilities that follow. The focus is good; the concern is needed.

Morgan’s section on the text of James 1.1 is basically a rehash of what he said in the previous section ‘James in Context.’ While he gives a footnote telling the reader that though we read this in the last section, it’s good to review it again to interpret James 1.1. However, we did just read it in the previous section. Rather than reading it again, I skipped over it. Though the information doesn’t need to be profound, something new (besides the meaning of ‘servant’ [doulos]) could be added to bolster the discussion.

While the book is easy to read, both Morgan (who wrote the sections ‘James in Context’ section, the portion of James 1.1-18, and the ‘Theology of James’) and Ellenburg (who wrote the commentary portion of 1.19-5.20) are settled in giving us the Greek definition of important words to better understand the context.

Helpful? Yes. Does one need to have an understanding of Greek. No, though it is helpful. Is it excessive and a bit overboard? Yes. Sometimes they focus more on giving an accessible understanding of the words than the connections between verses.

An example of this is seen in James 1.5-8. Morgan shows the definitions of words such as ‘wisdom,’ ‘knowledge,’ ‘doubt,’ and ‘double-minded,’ but he doesn’t elaborate on the kind of wisdom that comes from God or what it might look like. Instead, he states (what I feel is) the obvious, in verse 5, that God “gives liberally,” He will not “chide us or scold us for asking,” and “He will give” us wisdom, which is exactly what the verse says. After finishing this, he moves on to verse 6, showing that, yes, the double-minded man won’t receive anything, but what does this all mean to us? Practically speaking, I’m not sure. I don’t know much more than what James already told me to begin with. While this is not the only time this happens, it thankfully it doesn’t fill the entire commentary.

I don’t have a broad grasp of good James commentaries, though I’m aware of the excellence of Moo [PNTC] (referred to often by the authors) and Davids [NIGTC]. Yet I would say this would be helpful for some pastors, and indeed in study groups (as study questions are even provided near the end of each section). There is a huge (and correct) focus on God’s wisdom being imparted in this book to God’s people for their daily walk with the world around them, especially those who are their own family. Gain knowledge. Use wisdom.

[Special thanks to Derry at Christian Focus for allowing me to review this book! I was not obligated to provide a positive review in exchange for this book.]