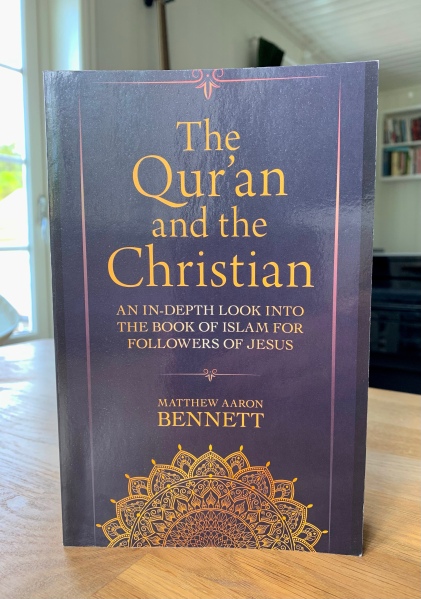 As a Christian writing about “the sacred text and religious faith” of Muslim friends, Matthew Bennett takes great care to be charitable toward Muslims in his new book The Qur’an and the Christian (9). He presents his understanding of Muslims’ beliefs in the best ways he can that they would recognize as accurate while carefully showing where their beliefs diverge from biblical teaching. Bennett writes, “Any alternative message and worldview that distorts or denies that good news is something that is incompatible with the biblical worldview that I believe to be objectively true” (9).

If we are going to speak with our Muslim neighbors and coworkers about faith, we cannot be ignorant about their beliefs. If we are ignorant of it, Bennett writes that “we will likely struggle to understand why our Muslim neighbors misunderstand us when we speak of the atonement offered through the Gospel of Jesus the Messiah” (15). Bennett then notes that the words atonement, Gospel, Jesus, and Messiah all appear in the Quran but “with irreconcilably different meanings associated with them” (15). If Christians want to be able to accurately present the gospel to Muslims, we need to know how they understand these terms.

One of Bennett’s main goals with this book is to get Christians to be familiar with the Qur’an’s teaching and how it has shaped Muslims’ theological language so that we can clearly communicate the gospel to them. In his book, Bennett takes three different perspectives into consideration:

Of all of these groups, it is the Christian who is most likely to benefit from Bennett’s reading, and Bennett includes these perspectives “to equip Christian readers with a better understanding of what the Quran is, how to read it, and what influence the Qur’an has had on their Muslims neighbors” (15).

Part One gives a brief biography of Muhammed, how the Qur’an came to be, the doctrine of abrogation and challenges to Muhammed’s claims, and the belief of the Qur’an’s incorruptibility. Bennett presents primarily the Sunni expression of Islam since they make up roughly 90% of Muslims, but he does make note (or footnote) of Shiite expressions and minority Muslim communities.

The Qur’an reveals God to its readers, but not the personal God of the Bible, the one who calls himself Father and his children sons and daughters.

“The qur’anic God does not create in order reveal himself to his creation, nor to dwell amongst his creatures. Rather, the qur’anic God creates in order to test humanity to see whether they will submit to his will or not. Moreover, when the qur’anic God wills to demonstrate his compassion, he does not come as a savior to rescue his people. Rather, he sends guidance and reminder so people can rescue themselves” (67).

What happens if a Muslim does not perfectly obey God’s will? The Qur’an teaches that if one repents God will forgive their sin, but how “God’s righteous wrath against sin can be satisfied while yet providing merciful rescue for sinners” remains a mystery (67).

Part Two, the Qur’an as Text

In Part Two Bennett looks at the Qur’an as a text, how it views the Bible, Jews and Christians, and how it repurposes stories from the Bible. The Qur’an isn’t embarrassed by the Scriptures, but we can’t say that it endorses the Bible either. Bennett writes that the Qur’an “claims to complete, extend, and perfect the heavenly revelation that Jews and Christians have received while also challenging the Bible’s authority” (96).

The Qur’an and Scripture

However, the revealed books given to Moses, David, and Jesus were “lost by their respective communities as they fell away from the divine instruction they had received” (106). So while the Qur’an “intends to embrace the Jewish and

Christian communities as those who have served as conduits of truth,” it also chastises “them for their mishandling and misunderstanding of the revelation given to them” (116).

As written above, the Qur’an uses some of the same terminology found in the Bible, such as the word for “covenant.” But while biblical covenants are founded upon God’s own faithfulness where his “faithful, intimate self-involvement in the daily lives of those with whom he has made a covenant” is seen, in the Qur’an (9:111) the “followers are indebted to God contractually” (120).

With this understanding of covenant, the Qur’an is able to accuse Jews of failing to keep their end of the bargain which led to God’s rejection of them. The Christians got their own chance but only before God perfected his covenant with Muslims.

What about the historical discrepancies when the Qur’an places biblical characters from different stories (even different periods of time) together? Instead of saying that Muhammed was confused or there is textual corruption, Bennett shows that there is actually a purpose to doing it this way.

Bennett likens the Qur’an’s use of biblical stories to that of a mosaic. “A mosaic… brings together pieces that would otherwise bear no obvious relationship to one another in order to manifest an image that exists in the mind of the artist” (141).

The Quran brings various people from biblical narratives together for its own purposes. Bennett shows a few qur’anic texts that bring Pharaoh, Haman, Korah, and even the Tower of Babel together as a foil to Moses. Moses followed God faithfully, the others denied God and were judged for it.

In chapter seven Bennett writes that reading the Qur’an will help Christians understand the role the Qur’an is lays in the lives of Muslims, how much of the Quran is written from God’s perspective, which implies that the Muslim reader ought to obey what is read (167). However, in chapter eight Bennett does not recommend using the Qur’an to point Muslims to Jesus, for it implies (or to a Muslim it can imply) that the Qur’an is an authority on revealing who Jesus is. Rather, Christians should show that we learn about who Jesus is from the Bible alone.

In chapter 9 Bennett skillfully shows how a Christian can bridge the story of Abraham’s intended sacrifice of Isaac—which does not fit well into the Qur’an—with the same story in Genesis 22 and how it fits seamlessly into the Bible’s story and points to the true Redeemer.

Matthew Bennett has written an excellent book that will help Christians understand the Qur’an better and with more nuance while also seeing how the Christian gospel offers true hope. His 40 Questions on Islam was very nuanced and easy to read, and this volume shows off Bennett’s gracious and careful nuance. With more refugees and immigrants moving to the West, it behooves Christian’s to be familiar with the Qur’an, what it really teaches, and how we can make a bridge to the gospel to offer salvation to Muslims. This is a very good resource to have.

Buy it from Amazon or Kregel Academic!

Disclosure: I received this book free from Kregel Academic. The opinions I have expressed are my own, and I was not required to write a positive review. I am disclosing this in accordance with the Federal Trade Commission’s 16 CFR, Part 255 http://www.access.gpo.gov/nara/cfr/waisidx_03/16cfr255_03.html.