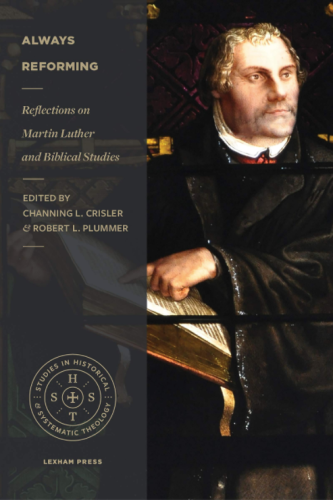 Mark Seifrid, professor of Exegetical Theology at Concordia Seminary, is a long-time Pauline scholar who has written books, commentaries, and contributed chapters to various books. This volume Always Reforming: Reflections on Martin Luther & Biblical Studies is a festschrift to honor Dr. Seifrid and his own studies on the great Reformer. The contributors are made up of Baptists, Lutherans, and Reformed scholars, which shows how, as Don Carson wrote in the Preface, as Seifrid “plied his way to confessional Lutheranism,” it was “not at the expense of abandoning an admirable theological ecumenicity” (xviii).

In Channing Crisler’s Introduction, we read of Luther’s humility when he approached the Bible. For Luther, exegesis began “with despair and a cry for help, which could only be answered by the Spirit” (xx). He interpreted individual texts according to their wider setting in the larger scriptural story. He warned against excess allegory (like one could read in Origin and Jerome’s writings). Instead, Luther preferred the “plain” reading of Scripture. No matter where Luther read Scripture, “the crucified and risen Christ stood at the center of Luther’s hermeneutic” (xxii). He comforted people with every part of Scripture. This still works today. We haven’t “evolved” past needing Scripture worked into our lives and hearts, for “the Christian experience unfolds between the tension of hope in a crucified and risen Christ on the one hand and a world full of darkness and divine wrath on the other” (xxiii).

Gregg Allison looked at Luther’s view of Scripture’s perspicuity/clarity as seen by n three of his works prior to On the Bondage of the Will. Luther critiqued Emser’s view that the Scriptures were obscure and in need of interpretation by the church fathers. He did this by observing that the Spirit spoke clearly in the scriptures, more clearly than in the fathers. So “if one interprets Scripture by the fathers, tue result can only be that Scripture ends up being more obscure than it was at the outset” (5). This isn’t meant to denigrate the church fathers, only to set them in their rightful place beneath Scripture. As well, if we are to test everything (1 Thess 5:21), by what can we test the fathers if not Scripture?

Robert Plummer wrote about Luther’s personal stance against allegory (as seen in Origin and Jerome’s writings as well as in some who write within the TIS camp, such as Hans Boersma). Yet Plummer also notes that in Luther’s published preface to his Deuteronomy lectures, Luther added brief allegories for almost every chapter. What gives? Besides that he used more allegory in his earlier years of teaching and writing, Luther’s use of allegory differed from Origin. Luther made it secondary to a book’s historical or literal sense and it needed to be rooted in those senses. It also often resembled what we would call typology today.

Channing Crisler’s chapter suggested that a “center” within Paul’s letter may be made up of “experiential wisdom”: where knowledge is included within experience (33). Luther understood theology to be an event between prayer, meditating on Scripture, and affliction/suffering/hardship. He shows what Luther thought about this single process, as well as how it showed up both in Paul’s life and his letters.

This is the kind of agonizing experience that gave Paul certainty in the gospel’s promise, and it is the kind of experience that could very well stand at the center of his theology. It is an experience in which the crucified and risen Christ daily elicited Paul’s cries for deliverance (oratio) brought on by death with him (tentatio) while answering those cries through reassuring word that there was life with him as well (meditatio). (49)

Robert Kolb shows by looking at Titus how Luther exegeted Scripture and how he taught his students.

In the book’s longest essay, Tim Laato introduces you to Matti Väisänen, bishop emeritus of the Luther Foundation in Finland, who has written extensively on baptism. Though Väisänen has defended the right of infant baptism, Laato writes that “he rejects important emphases of orthodox Lutheranism. The key issue here is the question of the regenerating power of God’s word” (66).

Väisänen believes one is regenerated only through baptism, and “denies and rejects the idea that God’s word could regenerate” (67). He believes this sort of teaching lead to the “theology of the two ways of salvation.” If one can be regenerated outside of baptism, why be baptized at all since that person has been “born again before their regeneration”? Due to this, Väisänen has written that God’s word has regenerating power “only in baptism, not outside of it” (67). Yet Väisänen also believes that both Luther and the Lutheran Confessions agree with him and not present-day Lutheran orthodoxy.

In his essay Laato uses the language of Luther, the Lutheran Confessions, and the Bible to show how Väisänen is incorrect, but what I found most interesting was how Väisänen contradicts himself! I will try to reflect that here as briefly as I can. (There is much more to this chapter than I can show here, so I’m not giving away too much here.)

Väisänen points out how in our use of language, natural “birth” refers to something that occurs one time and which is not (and cannot) be repeated. As a corollary to this, “spiritual birth also takes place once and for all,” a birth which “comes to pass in baptism only” (67). He uses Jesus’ incarnation as an example, “his ‘regeneration’ into a man” (67). Laato, quoting Väisänen, writes that in the “process of His ‘regeneration,’ the Son of God was conceived by the Holy Spirit through the Word” and was born in human flesh. Likewise, “our regeneration as children of God is preceded by conception through the Word of God” (67). But how does this happen if regeneration takes place only in baptism? Väisänen created a new concept, “reconception,” which means that “‘God conceives, i.e. initiates, a new man’ through his word, but only in baptism ‘God gives birth to a new man.’” (68)

One problem with his interpretation can easily be seen in 1 Peter 1:23,

“Since you have been born again, not of perishable seed but of imperishable, through the living and abiding word of God.”

The problem here is that in verse 25 Peter wrote, “And this word is the good news that was preached to you.” There is nothing here about baptism, and the imperishable seed that was implanted within the believers was preached to them. They heard God’s word and were regenerated.

For though you have countless guides in Christ, you do not have many fathers. For I became your father in Christ Jesus through the gospel.

Väisänen believes Paul speaks of “the seed of the word” that is sown in his hearers’ hearts, and they are regenerated at baptism. It follows that Väisänen “emphasizes that ‘reconception’ takes place through the word and ‘regeneration’ through baptism. His aim in doing so is, of course, to completely deny and reject the regenerating power of the word” (98). For Väisänen, “‘reconception’ is the beginning of new life while ‘regeneration’ [is the] consequence of it” (98).

When Väisänen made his distinction, he wanted to prove that it is only baptism which “marks the beginning of true spiritual life” (98). Going back to his example of Christ’s incarnation, when did Jesus’ incarnation begin? It wasn’t at birth, but at conception. “Thus, Väisänen undermines his own interpretations.” (98)

Tom Schreiner shows evidence in Paul’s letters that believers continue struggling with sin until Christ’s return. We should not think we are better than we really are, but neither should we become “discouraged because we overestimate how godly we can be [until] the resurrection” (138). Ben Merkle looks at how Romans pervaded Luther’s life, thinking, teaching, writing, and theology.

Brian Vickers reflects over Luther’s “two kinds of righteousness.” When believers put their faith in Christ, they receive an “alien righteousness,” one that is not their own. They are declared righteous, and the right standing of the perfect God-man is imputed to that believer. Believers should then live out that righteousness and show it to others. We are free from idolatry and free from putting ourselves first before our neighbor. We are saved in Christ. The book ends with a sermon by Oswald Bayer.

This is a fine book on Luther and his teachings and theology on honor of Dr. Seifrid. Perhaps what surprised me most about this book was that it was actually a festschrift in honor of Dr. Seifrid. There is no mention of him on either side of the book’s cover. Regardless, it doesn’t change the content of the book, which emphasizes the importance of God’s Word in Luther’s life and teaching, in his counseling, and how his beliefs can challenge biblical studies today to not remain merely within the realm of academia but to stretch out and reach all who are in the church, which Christ bought with his own blood.

Buy it on Amazon or from Lexham Press