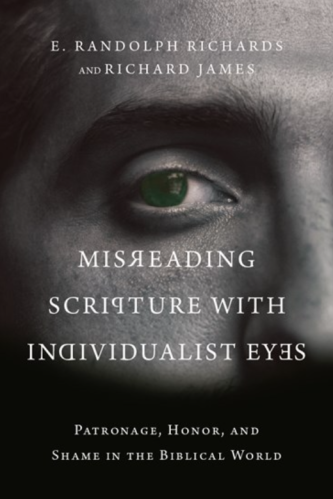 The world’s a big place, and there are many cultures. In America there are supposedly 11 different cultures. That means there are roughly eleven different ways of thinking about life, from some big issues to how you interact with neighbors and stranger, to family values, etc. But to leave and go to a different country, you will be met with culture shock. And everyone thinks their own culture is the standard. Their culture is what is “normal.” And then we visit or move to another country and are befuddled over why people have dinner this way, or why they spend their free time that way, and why they think it’s weird that you don’t think the same way. E. Randolph Richards is provost and professor of biblical studies at Palm Beach Atlantic University, and Richard James is a cross-cultural trainer involved in leading church planting teams in the Middle East. The authors’ aim in this book is to help us from being so confused when we read the Bible.

One big difference between people across the globe is individualism and collectivism. Individualism says, “I am my own person. I make my decisions concerning my life. No one else. My identity is found in what is unique about me.” People within collectivist cultures find their identity within their group or clan. The individual “is the sum of the community” (22). “Collectives are defined by the things they share with others, things such as shared blood, shared interests, shared history, shared land, and shared loyalty” (22). The authors write, “Collectivist people define who they are in relation to others. I might say, ‘I’m an honest guy.’ A collectivist friend would reply, ‘Says who?’” (22). The group would decide to entrust certain values to someone who has proven themselves honest within the group. I, as an individualist, might get a personal reference by a few random people I know but who might not have any connection to each other.

This matters because the biblical world was written in a collectivist world. If we forget that, and if we don’t know how these groups functioned, we will misread pivotal points of Scripture. Everyone tells stories, and everyone leaves gaps in the stories. The information that is left out is often assumed by that culture, and when we try to fill in the gaps with examples from our own culture (without properly understand the Bible’s culture), we misread the test and often miss key elements.

For example, in Genesis 18 when Abraham sees three visitors, “He employees them to enjoy his household’s hospitality: ‘Ao Abraham hurried into the tent to Sarah. “Quick,” he said, “get three seats of the finest flour and knead it and bake some bread”’ (Gen 18:6)” (35). Then Abraham brings out curds, milk, and a calf he has prepared for his guests. Now, there is no bread. I’ve always read it as though Abraham was rushing to get things out and so Sarah hadn’t had time to make the bread yet. (Of course, I forgot that it took time to slaughter the calf and prepare it!). The authors’ collectivist friends pointed out to them that, because there was no bread, it seems as though “Sarah hadn’t bothered to make it” (36). The visitors ask Abraham where his wife is, and he tells them that she is “there in the tent” (Gen 18:9). She hasn’t even bothered to come out and honor the guests! The problem isn’t that Abraham was too quick and left the tent before Sarah could get out. Sarah is not hospitable at all! Yet one guest (God) graciously responds, “I will return to you about this time next year, and Sarah your wife will have a son.” Even when Sarah dismisses her guests and does nothing for them, God shows great grace toward her by keeping his promise to Abraham for a son.

The Bible was written in what are called “high-context cultures. People in these cultures assume there’s a high level of shared information between them and their audiences. This means they don’t feel the need to state everything explicitly” (9).

One concept I want to talk about is shame. In the ancient world, there were two kinds of shame. Based on two words for shame in the NT, one kind of shame “usually referred to the kind of shame someone felt after committing an act the community saw and frowned upon” (180). The other kind of shame is “the sense of shame people felt before transgressing a boundary” (180). We have both of these concepts in the western world. Think about how we could say that “someone has no shame.” That person will do almost anything, perhaps to get attention, and they don’t seem to be embarrassed about it (even though they should).

There is also a certain kind pressure that society can push against someone when that person considers doing something wrong (at one point in time that would have been adultery). Of course, that can have an adverse effect and go the other way, when society or a certain group considers something wrong to be right, and they put pressure on you to act the same way (like the move to accept all forms of transgenderism as normal). If you don’t accept it, then you are “shamed” (or, in today’s parlance, canceled).

In 1 Corinthians 5, Paul’ is appalled over the sexual misconduct of a man in the church, and so his solution is to shame the man: “He is to be excluded from the church” (181). If and when he repents, the Corinthian church should welcome him back, forgive, comfort, and restore him. When used incorrectly, shame only does half of this. It pushes people out with no hope of bringing them back in. Rather, “shame used properly provides a path of restoration” (182).

Jesus shamed people. When the religious leader Nicodemus continually misunderstood Jesus, Jesus asked him, “You are Israel’s teacher and do you not understand these things?” (Jn 3:10). Later Nic is willing to defend Jesus in front of his peers (Jn 7:50-52). In Luke 7, a Pharisee comments to Jesus that the woman who was anointing his feet was a sinner. Jesus shames the Pharisee by revealing to him all the ways this woman is showing him all the respect that the Pharisee should have shown him but did not. Jesus shames Simon the Pharisee because he has “not worked to restore this woman to their community” (194). Simon shamed her for not embodying the community’s values, but in doing so he pushed her away. But she was the one who was upholding the “hosting requirement of their community” (196). Jesus agreed that this woman needed more forgiveness than Simon, and she received it. But Simon? We see no repentance with Simon.

I think this is a fantastic book. It’s was both enlightening and fun to read. It’s always interesting to hear how other cultures live life, and understanding collectivist cultures helps us to understand what was important in the cultures in the biblical world. Besides a few minor disagreements (such as how the authors write that all the other brothers besides Joseph in Genesis 30 are sons of Leah, when Bilhah, Rachel’s servant, had two sons, Dan and Naphtali. While they would have been offended in their own right, they still weren’t from Leah nor from her servant Zilpah). So take this book and read it alongside the Bible and see what you think. They will challenge your think on many passages (like the story of Joseph), and you will need to think (and perhaps read a few commentaries if you have them) if their teachings lines up with Scripture. I think overall, this book will open your eyes to understanding the Bible better.

Buy it on Amazon or from IVP Academic