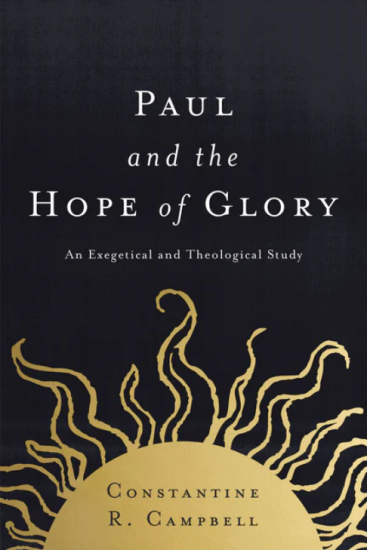 Constantine Campbell, Senior Vice President of Global Content and Bible Teaching at Our Daily Bread and former Professor of New Testament at TEDS,  came out with Paul and Union with Christ in 2015. Originally meant to be a standalone volume, he has now written Paul and the Hope of Glory as the second volume in this series. Campbell used the same methodology in this book as he did in the first volume. Meaning that in this book he covers 11 themes (see list below). Many of these themes are broken down into subthemes. For example, if you’re going to do a study on the kingdom of God, you can’t search only terms like “kingdom” and “kingdom of God.” You’ll need to search for “king,” a king’s actions, what the kingdom does or how it functions, and so on.

Campbell’s book is centered in Paul’s understanding of eschatology. With phrases like “it will all be worth it in the end,” we understand “that the end gives the final shape to things” (3). Yet the end—eschatology—shaped Paul’s thinking. But as Campbell argues, there’s eschatology and then there’s Paul’s eschatology, which once understood redefines eschatology. Because for Paul, temporally, the end has entered the present age. As Campbell writes, “The ‘end’ has already dawned on the ‘middle’ of time” (5). It includes the past (Jesus’ death and resurrection), the present (current situation of Christian communities), and the future (the end of all things).

When it comes to the now and the not yet, the old age and the new age, these “realms are spatial on nature since they mark out the ‘territory’ over which their rulers exercise influence and power, controlling those who belong to them” (5). The old age is ruled by sin and death, but the new age by Christ by the power of the Spirit.

To understand Paul, Campbell holds exegesis and theology together. Part Two looks at the themes and sub-themes of eschatology in all of Paul’s letters and then ties them together theologically on Part Three.

Chapter Two gives an overview of Paul’s eschatology as interpreted by guys like Schweitzer (1930), Vos (1930), Bultmann (1948-53), Barth (1932-68), Käsemann (1965), Ladd (1974), Sanders (1977), Campbell (2009), and N. T. Wright (2013) (and more) who have helped shape our understanding of Pauline eschatology. In his synthesis, Campbell looks at how some of these different voices have understood apocalypticism, the two ages and two realms (mentioned above), what is so “eschatological” about Jesus’ death and resurrection, new creation, glory, time and eternity, and more.

With each he provides an introduction (often noting the subthemes that are encompassed by each theme). For example, under Two Ages and Two Realms (ch. 3), the sub themes are:

Then he gives the verse (in bold) and it’s context in both Greek and English before he comments on what Paul is emphasizing here. He ends with a concluding summary.

Considering the two-ages schema, Romans 5:19-21 tells us about the rulers over the two ages: “sin reigns in death… while grace rules through righteousness…” (67). There are two domains—death and righteousness—and two rulers—sins and grace. Since “a realm will be shaped by its ruler as the ruler imposes its will over its domain,” everyone who lives in “the realm of grace and righteousness” will be “characterized by their goodness and light” (67).

Rather than reading imputed sinfulness into 5:19, when we look at Adam, his disobedience made a “route or pathway or entrance into the realm of sin and death” that everyone is born into. Yet this doesn’t undermine the doctrine of original sin. Adam opened Pandora’s box, a new ruler came out, and now everyone is subject to its rule.

Covering almost 150 pages, Part Three synthesizes the exegesis from Part Two and gives us Paul’s theology on these matters. Paul’s eschatology is Christ-centered. It began with the death and resurrection of Christ, it has come, he is ruling the new realm now, and it will be fulfilled when he comes as Judge.

Campbell also treats the question over whether Paul is an apocalyptic theologian. Though Paul wrote epistles and not apocalypses, Paul used mystery language, wrote about the coming of the Son of Man, held to a two-age eschatology, believed in Jesus through having received direct revelation, and expressed a soteriology of victory—Christ’s death threw off the powers of evil.

“[i]f by apocalyptic we mean that something hidden has been revealed, then the cross represents the ultimate apocalyptic event, since its appearance was opposite its reality. It appeared as a failure but was the victory of God over his enemies. Christ appeared stripped and disgraced, but in fact the powers were stripped and disgraced. The moment of Christ’s humiliation was the moment of God’s triumph.” (95-96)

Campbell affirms that Paul was both an apocalyptic and a covenantal theologian who held to a “salvation-historical schema” (380).

Campbell doesn’t simply place Paul in a box that he automatically believes in X, Y, or Z. If Paul doesn’t write about it, we can only surmise that he probably believed it, but he didn’t write about it. Paul wrote about Gods wrath, but what did he actually believe about hell? As Campbell writes, “Just because Paul does not mention ‘hell’ bu any of its usual terms does not mean that he did not believe in it… it is unnecessary to set Paul at odds with other New Testament voices,” such as Jesus (397).

In his previous book Paul and Union with Christ, Campbell argued that “union with Christ would be the webbing that connects all of Paul’s key theological commitments” (453). In this book, “eschatology is the frame of the web” (453). Every theologically significant event takes place within Paul’s “two-ages” schema. It is all-pervasive. I think this is a wonderful book. I somehow never picked up Paul and Union with Christ (which I need to), but I’m glad that Campbell has turned this idea into a series. I thoroughly look forward to more volumes in the future. Highly recommended.

Buy it on Amazon or from Zondervan Academic