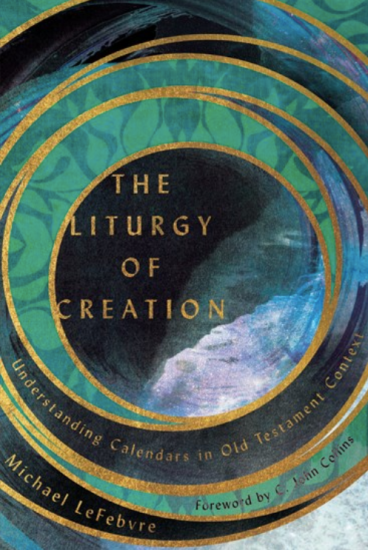 Here is a book about understanding calendars in Old Testament context (as the subtitle hints). Now I know for most that doesn’t sound riveting, and honestly, the book isn’t. The book is quite technical, especially as it considers Israel’s festivals and dates, as well as how the only dates we find in the Pentateuch are those which revolve around Israel’s festivals. And that’s a little odd, at least? This has actually been one of my favorite reads so far this year. Yes, it’s technical, but it has helped me not only understand the importance of the OT festivals (such as Passover) better, but LeFebvre guides us down a middle path between young and old creationism (as well, Creation vs. Evolution) to see the purpose of the creation story in Genesis 1 and 2.

That is the real highlight of this book. Yes, it’s technical, but it’s important (vital?) in being able to think differently about Genesis 1 and 2 besides only in “creation vs. evolution” categories. Moses wrote Genesis to Israel before people were thinking about evolution, so perhaps he had other ideas in mind? LeFebvre’s main focus is to understand the creation story and how it highlights the seventh day of creation: the Sabbath day.

LeFebvre, pastor of Christ Church Reformed Presbyterian, was spurred on to write his book because of the pastoral implications Genesis 1 and 2 hold for all the church: in the creation narrative, God is likened to a Hebrew laborer, who works during the day to prepare his creation, and who sits down “to enjoy his bounty on the seventh” day (195). In Days 1-3 God orders the creation and prepares it for fruitfulness, and in Days 4-6 he populates it for bountiful blessing, ending with mankind made in his image.

One of LeFebvre’s main points is that “the Pentateuch uses dates for liturgical instruction, not to provide a journalistic chronology” (61). As I wrote above, the only dates we find in the Pentateuch are those which revolve around Israel’s festivals. LeFebvre goes through all twenty-one dates (a few which actually show up in the Flood narrative) to shows where they fall on Israel’s calendar. Now, he believes these dates “historically occurred on different dates [from what we read in the Pentateuch]… Rather, new dates were assigned in the narrative to realign those memories with the agrarian cadences of labor and celebration in Canaan [that is, the Promised Land]” (80).

I don’t know if I quite agree with LeFebvre here or not, but his examples hold. Americans don’t celebrate many holidays on the day they happened. For example, Jesus wasn’t born in December 25. We celebrate Thanksgiving for one day on the last Thursday of Novemeber. The original Thanksgiving was a three-day feast which took place somewhere “between Sept. 21 and Nov. 11, 1621” (81). George Washington was born on February 22, 1732. We celebrate his birthday on the third Monday of February, allowing for a three-day weekend (this occurs with Memorial Day and Labor Day). So we celebrate Washington’s birthday anywhere between February 15-21, when none of these days are his actual birthday. The point is we get a day of rest. LeFebvre contends that the same thing happens with the dates in the Pentateuch. Some may have occurred just as the text says, but all fall on or around Israel’s festivals so they could rest and celebrate life together as God’s people.

The book’s thesis doesn’t fall or stand whether you agree with this. LeFebvre’s thrust is for us to see that “the creation week narrative contains the history of God’s ordering of the world, mapped to Israel’s observance schedule for stewarding that order with labor and worship, without any concern to preserve the events’ original occurrence timing” (117). Could God have made everything in one day? He could have, and it’s possible he did. But Moses explains God’s creation as occurring within a week to draw a comparison between his work and the Israelites’ work week. (Though it may very well be that God actually did take six days, but that doesn’t need to be elaborated on here.)

Israel could read the creation narrative and hear how the God of the universe has “worked” just like them for six days, and then rested on the seventh to enjoy what has come up from the ground. My favorite section was Part Three when LeFebvre explains Genesis 1:1-2:3. He shows how God brings the world from being empty and void (or unformed, uninhabited, and unfruitful), to one that is prepared for life and abundance (Days 1-3), and then fills the world with “timekeepers” (the sun, moon, and stars), living creatures (fish, birds, and animals), and with humans, made in God’s image, who have authority over every realm and every animal (Days 4-6). And just as God has blessed the world and mankind, so should man relate just as well to the world and creatures he has made. And though they must work endlessly in their fields, they see that the mighty King of heaven has also worked to great all things, and they get to rest from their labors, enjoy the fruit of their labors, and commune with God on the Sabbath.

If you’re a pastor or teacher and you know you’re going to be teaching through Genesis one day, pick up this book. It is well worth your time. If you’re an apologist, interested in apologetics, or even biblical or Pentateuchal studies, pick up this book. It will help you discuss with others you have only heard of the young vs. old earth views. I don’t mean that you should do this with a sense of pride (LeFebvre could be wrong!), but that you do it with humility and understanding that many people have long wrestled with Genesis 1 and 2, and you should too. LeFebrvre has given a great gift, and I am pleased to recommend it whole-heartedly.

Buy it from Amazon or IVP Academic!