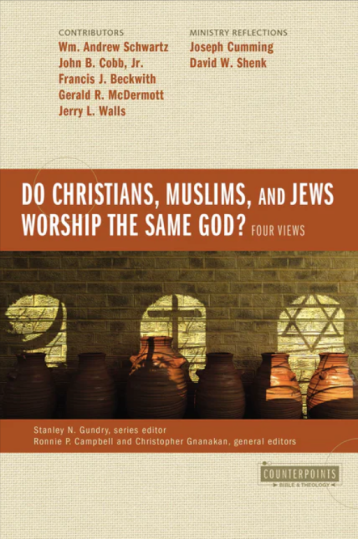 Christians, Jews, and Muslims all claim to worship God: the one God who revealed himself to Abraham, Isaac, Jacob, Moses, as well as to other OT figures. But do they, in fact, worship the same God? In 2015, tenured professor Larycia Hawkins “was placed on administrative leave for comments made on social media, which, in turn, led to a fury storm of articles written about this topic on the worldwide web” (9). In one Facebook picture, Hawkins donned a hijab and wrote, “I stand in religious liberty with Muslims because they, like me, a Christian, are people of the book” and “as Pope Francis state last week, we worship the same God” (9-10). But do Christians, Muslims, and Jews all worship the same God? What do we mean by “the same”? (As well, what do we mean by “worship”?) What this means has a range of practical implications (and the two helpful ministry reflections at the end begin scratching the surface there).

This newest volume in Zondervan’s Counterpints series offers four different views, and it ends with two ministry reflections. The way books in the Counterpoints series works is that there are a range of views. Each author presents their view within 20 pages, the other authors give a short 5-or-so page response, and the original presenter offers a final response.

Each chapter was more and more compelling. I agreed with almost nothing of the first position, a little more of the second position, a good bit more of the third position, and with most of the fourth position. Yet even still, due to the final two ministry reflections, I could see how one could argue that these three groups worship the same God. We are thinking of the same being. However, while we pray to and sing praises to God, whose worship does he actually receive? I have to say that, according to the bible, God accepts the worship only of those who honor him by putting their faith and trust in his Son, Jesus Christ.

I began reading this book thinking that the idea that christian, Muslims, and Jews worship different gods wasn’t too difficult to argue for. I was actually surprised at the arguments throughout the book. They helped push me to think more deeply about the issue and to really question what I believed. In the end, I still believe the same think, but I have a better understanding for the other side of the argument. This is a good book for apologists, pastors, teachers, and for anyone working among Jews and Muslims (and Christians as well, it’s a good point of reference). However, this isn’t easy reading and has a fair bit of philosophy in it. But if you can get through it, you’ll come out with a healthier understanding on this subject.

Buy it from Amazon or Zondervan Academic!