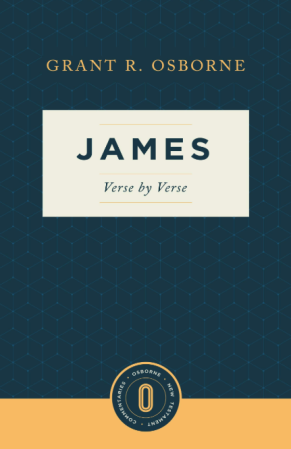 Before his passing, Grant Osborne decided to finish his academic career by writing a commentary on every book of the NT for laypeople. His three main intended uses were for devotional aids, use in Bible study groups, and as sermon helps. The church needs teachers so that they don’t commit heresy, but studying the Bible doesn’t need to be a”a tedious duty we have to perform” (xi). Osborne wanted studying the Bible to be a joy.

Grant Osborne is doing pastors and teachers a big favor with his commentary series. This volume on James is a bit under 300 pages, and it is terrific. It is easy to read and understand. Though written by an academic, this series is not ‘academic.’ It is not filled with terms from another language, the reader does not have to choke on reading about the different “criticisms,” nor does the reader need to know what every other scholar thinks about a passage. Osborne always offers his own interpretation of any passage, and when he does present other views, he represents them carefully with grace.

The central theme of James’ letter is “ethical faithfulness to God” (16). It was probably the earliest NT letter, being written some time in the 40s AD. It is “the one writing we have from the Jewish Christianity of Jerusalem and surrounding environs” before Paul’s Gentile missionary trips began (2).

Who wrote the letter? Osborne gives five options and takes the traditional view that this James is Jesus’ brother. Some have argued that “the Hellenistic figures of speech… and literary flow are… too far above a Galilean peasant” (3). Yet studies in recent years have overturned this idea. Use of Greek was widespread in Palestine, especially in Galilee. Osborne writes, “Greek would have been spoken by Jesus’ family from the start as a second language, since Galilee had a large Hellenistic population. Throughout history, many great authors have come from impoverished families, and there is no reason why that could not have been the case with James. It would have been similar to Europeans in our time who normally speak three or four languages” (3). Though James’ letter isn’t the highest form of Greek, it “is still excellent Greek” (3).

Yet why doesn’t James seem to mention Jesus? In fact, though he only mentions Jesus twice, some think there are “as many as fifty or sixty explicit and implicit allusions” to the sayings of Jesus. What better way to honor Jesus than to put his teachings into practice! You virtually meet him on every line.

Are James and Paul at odds with each other? Osborne believes James wrote his letter during the 40s AD before Paul’s missionary travels began. Paul’s debate with legalistic Judaizers hadn’t even begun at this time. Instead, James “is developing his own theology of the relation between the Mosaic law and Christian freedom and grace” (6).

Osborne provides his own outline of James. He believing James wrote his letter in a logical series of triads.

1:5—Wisdom is not a natural human ability, and we get it from God alone and only when we ask him for it. Unlike the double-minded person of 1:6, God is single-minded and gives generously. Unlike the unpredictable Greek and Roman gods, God is completely devoted to his children. James promises “the spiritual maturity to trust him [God] to turn our disadvantages into spiritual growth” (29).

1:6—Doubt doesn’t refer to a person unsure if God is going to grant his request. It means have a divided mind. You run to the world for answers, then God, then the world. Should we trust God and his wisdom or our own (which we received from God in the first place)? Because we run back and forth, we resemble a wave on the sea, blown about by empty air. They rely on blind luck more than they do on God.

1:17—God’s “good and perfect gift” is wisdom (17), though it is also related to James 1:4. Trials are a gift from God because they lead us to spiritual maturity as we rely on and trust in him. The greatest gift was our “new birth” (1:18).

1:23-25—Who looks into a mirror with no purpose? Who sees dirt or a cow lick and does nothing about it? Most people when they look into a mirror, if they see something amiss, will clean their face and comb their hair. When we read or hear God’s word, God is showing us who we are and who he wants us to be. Why study the Bible if you’re not going to try to change to be more like the perfect image of God, Jesus Christ?

2:13—Osborne writes that “We are saved by grace, but we will be judged by our works” (76). We are saved by faith in Christ, but believers will each stand before God and give an account of their actions done toward God and others, and we will “stand before him in shame” for our merciless acts (77). “What we do to others we are actually doing to God,” so forgive and show mercy to your neighbor (77). Mercy triumphs over judgment.

4:5-6—Osborne believes that the NIV (2011), NASB, NRSV, and ESV have translated this verse correctly, “God jealously longs for the spirit he has caused to dwell in us” (124). God breathed life into us, and, as his bride, he is jealous when Christians “stray after other gods and the world” (125).

How does God give more grace? Our straying makes God angry. Not only is he is the best thing for us, but in the new covenant we have dedicated ourselves to him. We renege on our promise. But God desires to bring repentance, and so he gives more grace that make us more spiritually mature and able to stand against the world’s temptations (1:17).

Buy this. Pastors, teachers, and laypeople will be pleased with Osborne’s commentary. Osborne writes at the end of his introduction that James “virtually preaches itself” (20). Osborne wants to lead his readers to a knowledge of Christ that expresses itself in joy, awe, and obedience in all matters of life. Osborne is faithful to Scripture, and I would highly recommend anyone who wants to study the Bible to pick up any of Osborne’s commentaries. Osborne will be a great conversation partner for most who want to study the New Testament.

Buy it from Amazon or Lexham Press