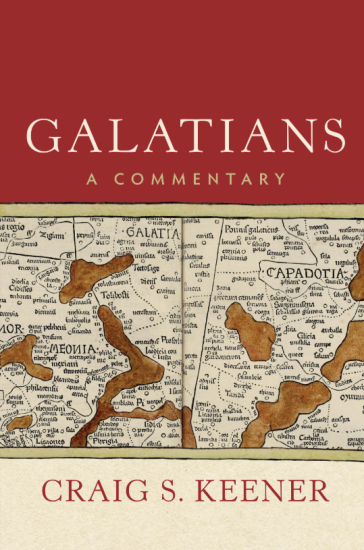 Asking to review a book by Craig Keener feels a bit like cheating. Everything he writes is quality, nuanced, well-read, and is usually massive. Even if you don’t agree with all of his conclusions, he is so well read you know his arguments don’t lack support. Who wouldn’t want to buy his books? Perhaps not everyone has heard of him, or they need some incentive to buy yet another commentary. Either way Baker Academic graciously sent me Keener’s new tome of a commentary on Galatians. His shorter version was released in April (see under my Lagniappe section), and Baker Academic had invited him to supplement that commentary with a longer version through them.

How massive are Keeners books? His four volumes on Acts came out only a few years ago running at 4,500+ pages. His two-volume work on miracles is over 1,000 pages, and his two-volume John commentary is over 1,500 pages. His commentary on Matthew is just over 1,000 pages, and his upcoming book on the reliability of the Gospels is over 700 pages. But Keener isn’t fluffing his way through his books. The actual commentary of this work is 588 pages, and the rest of the book’s 260 pages consists of bibliography and indices.

Growing up in the South, many social rules go unstated. You grow up seeing the silverware placed a certain way, watching people wave to each other as they drive through the neighborhood, the shifting of eyes when you make a social faux pas. If you do something wrong, people have a way of letting you know. You don’t always need to be told you did wrong to know you did wrong.

When I moved to Germany and England, I had to be explicitly told what not to do, say, or how not to act. It wasn’t a given that I would know the social cues and rules. Such is the case with Galatians. Paul and the Galatians knew each other well. But who are these Galatians? Why is Paul so upset with them? What arguments lie under the letter that Paul assumes he and the Galatians know, but which we do not know? Keener draws from a range of sources in his commentary, primarily those closer to Paul’s time and “geographic sphere of ministry” to better understand this small but highly debated letter (5).

A few dominant themes in Galatians are the gospel, law and promise, and the Spirit (to name a few).

Keener gives 34 excursuses (A Closer Look) throughout his commentary based on key terms and ideas in Galatians:

Cutting to the chase, these are full and just what you would expect from Keener. Maybe I’ll write about a few of them within the coming months.

Keener also adds some Bridging Horizons sections throughout the commentary. Sometimes they are about God’s giftings, or how we (and the apostles) aren’t perfect, incivility and culture, union with Christ, Gal 3:28 and barriers of culture, status, and gender. There aren’t too many of these, but the few that are in place will help get your practical gears turning.

Keener’s commentary drips with erudition. How one can have the time to read so much, process it all, and to remember it is beyond me. Yet I am thankful for God’s gift in Keener, and for Keener’s diligence in wanting to know God through his word. This commentary is certainly for the academic and the teacher. The student could certainly make good use of this as well as the pastor (though the pastor may want to defer to the shorter volume).

Buy it from Amazon or Baker Academic!