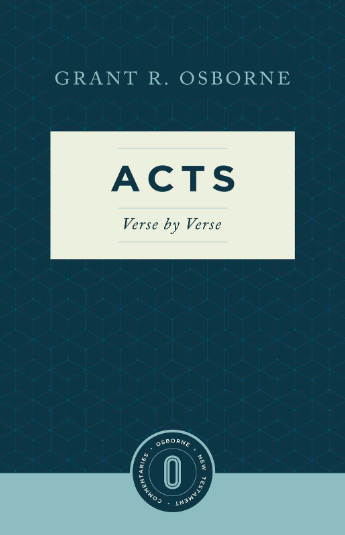 The late Grant Osborne, former professor of New Testament at Trinity Evangelical Divinity School, had decided to finish his academic career by writing a commentary on every book of the NT specifically for the layperson. The three main intended uses of his commentary are for devotional aids, for use in Bible study groups, and as sermon helps. The church needs teachers so as not to commit heresy, along with being counseling through life’s hardships, but studying the Bible doesn’t need to be an arduous task, ”a tedious duty we have to perform” (xi). Osborne wants studying the Bible to be a joy, not a burden.

I like Osborne’s commentaries. I’ve reviewed John and Philippians in this series, and I hope to review others as well. This volume on Acts is really only just under 500 pages. That sounds like a lot, but remember, the book of Acts is twenty-eight chapters long. There’s a lot that needs to be said! David Peterson’s PNTC volume is over 700 pages long, and Eckhard Schnabel’s ZECNT volume is over 1,000 pages long (his Logos edition doesn’t even come with page numbers. That edition is even longer than his physical edition). Of course, just for measure, Craig Keener’s commentaries on Acts spread to four volumes, around 4,600 pages! Osbourne’s 500 pages really doesn’t sound like so much.

Osborne’s commentary on Acts, like the others, is very accessible. Though written by an academic, this series is not “academic.” Osborne just writes about the text. He rarely talks about Greek and only does so if it’s an important word. He doesn’t write about what every other scholar thinks about a passage, though when he does present other views, he represents them carefully with grace. He offers readers his opinion on what is going on in Acts.

Osborne begins with a twenty-page Introduction. He holds that Acts was written by Luke around 62 AD. Acts builds on Luke, and it is “a historical narrative tracing how the Christ followers built on their founder and became a worldwide force” (1). In the thirty year interval between Christ’s death and Paul’s Roman imprisonment, the gospel had, in a way, gone to “the ends of the earth” (Acts 1:8). Much to anyone’s surprise, this is accomplished in the midst of a lot of adversity. The Triune Godhead is the central figure of the book, and the book is more aptly called “The Acts of the Holy Spirit” than “The Acts of the Apostles.” Speeches take up 1/3 of Acts. While some think Luke made up the speeches, it is much more likely that he summarized the material and focused on common themes (can you imagine having to read everything that was said in every law court Paul stood trial?). Osborne finds five major purposes in the book of Acts:

The major theological themes, probably not surprising to see, are: salvation and salvation history, the proclamation of the gospel, Jesus the Christ as Savior and Lord, the Holy Spirit, the church, and the social concern of the poor and the marginalized. Christ healed the sick and saved the lost, and the church cared about both the physical and the spiritual. Osborne says, “Social concern is a core emphasis of the early church and is an essential part of the salvation of sinners” (19).

After this, Osborne’s commentary is split into twenty-nine chapters, divided where he sees important breaks in the text. Though this isn’t a simple commentary, his writing is clear and accessible. If he can’t be sure of a certain interpretation, he gives his opinion but goes no further. He doesn’t try to wring the text to get the answer he wants. That is someone you should be fond of reading. Go and do likewise.

Pastors and teachers will be pleased with Osborne’s commentary. Osborne wants to lead his readers to a knowledge of Christ that expresses itself in joy, awe, and obedience in all matters of life. Osborne is faithful to Scripture, and I would highly recommend anyone who wants to study the Bible to pick up any of Osborne’s commentaries: laypersons, pastors, and teachers. Osborne will be a great conversation partner for many who want to study the New Testament.

Buy it from Amazon or Lexham Press!