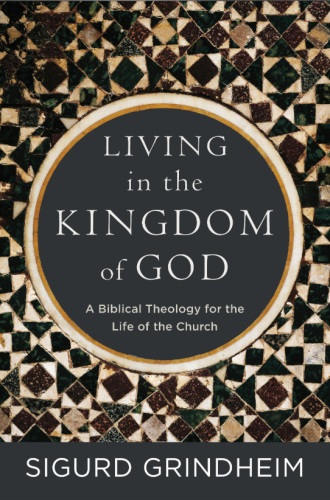 What is the kingdom of God? Is it a people? A place? Is it around us now? Will it come in the future? Is it in heaven? Do we build it? Proclaim it? Who can be in it, and how do they get in? Where is it? And Should we live any differently now because of it?

Sigurd Grindheim, NT professor at Fjellhaug International University College in Oslo, Norway (which I’ve actually attended) and adjunct prof at TEDS, has written a biblical theology for the life of the church. The church is not equivalent to the kingdom of God, however “we should expect the kingly rule of God to manifest itself in a similar way through the church” (148). This “similar way” is that God showed his power when the sovereign Lord died on the cross and brought the possibility of redemption to the whole world. Yet “it appears to the world like weakness” (148). The church is weak. In fact, the church is annoying. “Some churches just seem to be jerk magnets” (95). In fact in fact, “Jesus loves annoying people” (95). That is, he loves people who are annoying. He was surrounded by the wrong people on in his earthly ministry. Should we be surprised that we rub shoulders with people who aren’t like us on Sundays?

God, the King of all, made Adam and Eve to be his vice-regents. They were to rule the world along with him. As they had children, they were to rule and image God well so that all would worship God. Adam and Eve quickly rebelled. God redeems Israel out of Egypt, showing that his Kingly power was greater than that of Pharaoh’s. Israel was to image him as a “kingdom of priests.” As priests, they represented God to each other and to their pagan neighbors. As a kingdom, they had God’s perfect and holy rules and would live in justice and righteousness. But Israel failed in that too. Israel’s kings failed. But there would be a king would would have God’s Spirit upon him, and would bring justice, peace, righteousness, in full perfection.

Jesus arrives, and he proclaims the kingdom of God. Grindheim says this should be translated as the “kingly rule of God” has arrived (5). God is the king, and his rule can be seen in Christ, God in the flesh. Jesus “himself brings the kingly rule of God” (25). Christ brings a different kingship (ch 3). None of us can keep God’s law because we are full of sin, but Jesus was perfect. It is impossible to enter the kingdom on our own (ch 4), but God made it possible through Christ. We are to “practice our righteousness” by loving our neighbor, even (or especially) those who cannot pay us back (59-63).

Christ is ruling now, and we should live differently. Being people of the kingdom (ch 5), we have Christ’s delegated rule. We are to confront evil, and we are to do it with the gospel. We are to forgive, and doing so shows God’s kingly rule. We do not build the kingdom, make it grow, or try to extend it. We proclaim it (83). To strangers. To each other in our own church. Just as Jesus overlooks our sins (he died for them, he does not judge us), forgives us, and loves us mercifully, we should overlook the sins and issues of others, knowing full well we have our own problems. We are called to love one another and work through our sins and problems.

Christ’s death and resurrection not only frees inmates from prison but it puts them into new seats as rulers of the kingdom (ch 6). Besides the devil, our main enemy is our own sin. Yet by dying in Christ we have died to sin. It is no longer ruling over us. We are new creations who are given God’s own Spirit as a down payment of our future life.

The gospel should transform society (ch 7). Paul’s ministry had a massive impact on the city of Ephesus that people began throwing away their magic books. Behind the scenes there are dark, spiritual powers working in cultures and societies, but Jesus brings unity to all people who believe. Governments bring their ideas by force, but Jesus offered himself as a servant of all. Grindheim offers two examples of societal change: Martin Luther King Jr. and Laszlo Tokes.

This victory is a paradoxical victory (ch 8). Grindheim shows how the kingdom is seen in the book of Revelation. Jesus conquered by dying, and believers conquer by being loyal to Christ, by resisting giving their loyalty to anything or anyone else ahead of Christ, and know that the unassailable powers around us really “have no power at all” (171).

This is an excellent exposition on the kingdom of God, which is seen all throughout Scripture. I really enjoyed seeing Grindheim’s personality in his book. He gives many examples from his own life, a few from his time in the Norwegian military, a few from his time in Ethiopia, and a few self-deprecating examples that didn’t put him in the best of light, but highlighted God’s forgiveness as seen in others (73) or how God’s kingdom is not at all what the world is looking for (94).

This book is very accessible and was easy to read. I was able to skim read chunks of it because Grindheim doesn’t just make passing references to texts, but he looks into them. In talking about the impossible requirements in the kingdom, Grindheim spends almost three pages looking at Matthew 19 and how hard it is for the rich to enter the kingdom, as well as John 3 and the Son of Man being lifted up by the bronze serpent. However, though I’m familiar with the texts enough that I could skim these sections, Grindheim’s paragraph long explanation on how it is impossible for man to enter the king, but with God nothing is impossible made more sense to me than other commentaries I’ve read on the subject (maybe I’ve not read enough?).

In his section on John 3:14-15, Grindheim rehearses the bronze serpent scenario in Numbers 21 and illustrates what some of the Israelites may have been thinking, both those who thought “This must be a joke” and those who thought “Well, it can’t hurt.” What I like about this is that there are many in the church who are turned off by academic books. But Grindheim gets down into the weeds and makes the Israelites seem like real people. Just as they had different thoughts on the bronze serpent, so people today have different responses to Christ. But once just has to look at Christ. While it can seem unbelievable that all we have to do is to look to Christ, we are to be like children. Children know how to receive gifts. “They don’t question whether they have deserved the gifts or whether they are worthy of them” (56).

Sigurd Grindheim has done an excellent job on writing an easily accessible book for the church on the kingdom of God. These are not the words of an ivory tower theologian, but of one who trusts God even when the church doesn’t fit the mold he imagines it should fit. Yet through his experiences he sees the greatness of God and the way he works in his kingdom now. Christ has conquered sin, and we have died to sin in Christ. Let us live and bear the fruits of righteousness that we would not build but proclaim God’s kingdom to those around us.