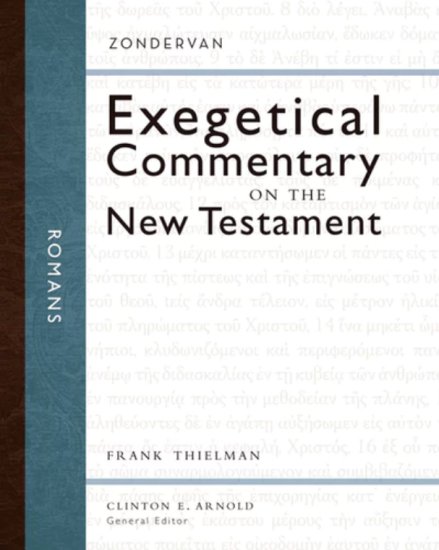 If any book has a flood of commentaries, it is the letter of Romans. Frank Thielman, the Presbyterian Chair of Divinity at Beeson Divinity School, has written a brand new commentary on Romans which he hopes will simply “play the role of a footman, opening the door to Romans and then quickly stepping out of the way so that others might ‘enter’ the letter itself, sit at the feet of the apostle Paul, and in the apostle’s voice hear the voice of God” (14).

His Introduction is 23 pages long. He covers life in Rome in the mid-first century, Christianity in Rome during this time, the setting of Romans in Paul’s ministry, and Paul’s purpose in writing Romans. Thielman shows that life in Rome was generally very difficult. It was a “zero-sum game” where one man’s success “depleted the amount of luck available to everyone else, and so working to damage a neighbor’s success could aid one’s own survival” (25). He even notes a tombstone which basically praises the person’s death by stating they are no longer behind on their rent (for their lodgings are free and permanent), they no longer are suffering from arthritis or lack of food, and they are no longer in debt! Thielman says Paul wrote Romans in Greece in the winter months of AD 56-57.

The Literary Context shows how, say, Romans 8:1–17 fits within the letter of Romans. A Progress Bar (the look of which I still think is hokey) with an outline is added at the end of this section. The Main Idea is a short and simple paragraph on the whole passage. The Translation and Graphical Layout is Thielman’s translation of the Greek text represented in a sentence phrasing diagram to show how each clause relates to the others. (See my review of the Grant Osborne’s Matthew volume for an example of the Graphical Layout).

The Exegetical Outline gives a detailed outline for the chapter.

In The Explanation of the Text, Thielman examines words, ideas, rhetoric, the social context, and/or biblical theology.

The highlight for many pastors and teachers will be the Theology in Application section. Here Thielman discusses what the theology of 8:1-17 means for the church today, giving insightful thoughts on how we are to live today. He writes that this section “describes the change that comes to the person God has freed from the sort of slavery to sin Paul depicted in 7:7-25” (393). Thielman lists four ways God has reoriented Christians’ lives by giving them his Spirit and elaborates on each point. I will give a brief sentence summary of what he says:

The commentary ends with a Theology of Romans, focusing around God and his character, how humanity relates to God, and how God sent Jesus christ to save the world.

Though there is much to say, here are brief comments on a few of Thielman’s interpretations.

Thielman also has many In Depth sections where he takes a deeper look at a particular topic.

As biblical scholarship progresses, commentaries are (actually) needed. One does not need to buy them all, and we can be thankful that there are scholars who can devote their lives to wrestling with the text and distilling it down to others. Thielman has added another solid, thick, and helpful commentary to the list of many good volumes to choose from. His incisive thoughts on the main ideas, structures, and meanings of Paul’s long letter will benefit you as you seek to know Christ in Romans. And there is application to boot!