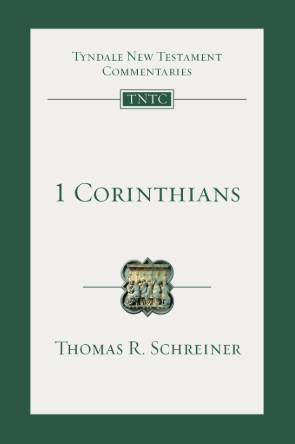 The Tyndale Old and New Testament Commentary Series has been around since the 1950. They offer more depth than one-volume Bible commentaries without requiring a knowledge of the biblical languages or of more technical scholarship. In this volume Tom Schreiner replaces Leon Morris’ former edition of 1 Corinthians in this series. Schreiner himself states that “it would be best if Leon Morris were still with us so that he could write the revision as well” (xi).

Schreiner has been a New Testament and Pauline scholar for 40 years and is known for his clarity and for representing others’ views so well. Although, as is normal for this series, Schreiner doesn’t often list off too many opposing views. His “aim in writing [this commentary] is to explain the text before us” (xi). Rather than giving you five interpretations of a given verse, Schreiner presents his own view, and only occasionally presents other views. This isn’t to hide other views but to keep the commentary on track. The reader wants to understand 1 Corinthians, not what everyone else says.

Honestly, this is refreshing. I wish more commentaries were like this. In his 2 Corinthians commentary in the Pillar series, Mark Seifrid gave his own exegetical and theological opinion of the text. He was informed by the opinions of many others, but he didn’t need to tell the reader about all of them. Readers can get lost in the maze of who-said-what-and-this-is-why-I-disagree. If you disagree with someone, put it in the footnotes, and keeo your eye on the text.

Schreiner’s introduction covers the city of Corinth, Paul’s time in Corinth, what brought about the letter, and the nature of the letter (it is one unified letter written to persuade its readers). Schreiner then gives nine themes running throughout Paul’s letter:

At the beginning of each new section, Schreiner summarizes the text. Then, with each subsection, he provides the context, verse-by-verse comments, and ends with a theological recap. With each verse, Schreiner gives a one sentence comment on how this particular verse fits within Paul’s argument. Why does he say this? How does it fit with what he just said? I hope you see how useful this is, because understanding Paul’s thinking from just one sentence to the next can be quite confusing.

Schreiner explains the whole letter in under 350 pages. Most verses rarely receive more than two paragraphs, though a verse like 11:3 receives just over six pages. Below I list a few of his interpretations of different verses.

1:12: Schreiner seems to take the “I follow Christ language” as Paul saying, “You all follow human leaders but, I, Paul follow Christ” (62). This seems strange, but he references Ciampa and Rosner’s PNTC volume on 1 Corinthians (and they reference Thiselton’s NIGTC volume, thus, commentary-ception), who write, “I [Paul] mean this, that each of you says, ‘I for one, am one of Paul’s people’; ‘I, for my part, am for Apollos’; ‘I am a Peter person’; ‘As for me, I belong to Christ.’”

1:13: It isn’t that baptism isn’t important and that Paul focused on the gospel only. But the Corinthians were misconstruing baptism and boasting about who it was that baptized them, rather than boasting in the fact that they were baptized in the name of Christ (cf. 1:31).

4:1–4: The Corinthians were trying to decide how effective Paul was in his ministry. They thought they could judge the quality of his ministry.

10:13: “no temptation has overtaken you” refers to God’s faithfulness (v. 13b) in preserving Christians. Because this verse falls within Paul’s discussion about the relationship between food and idolatry, Paul is warning his church not to commit apostasy, thus falling away from Christ.

12:10: “Prophecy is communicating revelation from God in a spontaneous utterance” (259). It is not the gift of teaching, for that (and knowledge) are their own gifts. I could not find any comments about whether the gift of prophecy is enduring or has ceased, so probably for Schreiner’s opinion on that you can picks up his book on Spiritual Gifts: What They Are and Why They Matter.

12:13: At conversion, the believer is “drenched with” and “drinks of” the Holy Spirit. That is, at conversion all Christians receive the Spirit.

14:33c–35: Some have argued that these verses are not original to Paul but were added later. Schreiner disagrees saying they “are almost certainly original,” which obviously still gives some room for the other view (296). The problem here isn’t that women spoke (they pray and prophesy in 11:5), but probably that they openly disagreed with their husbands, “asking disruptive or challenging questions and interrupting the congregational meetings” (297).

1 Corinthians 15: Schreiner says that the problem here wasn’t an over-realized eschatology, but merely that some of the Corinthians held the widespread Greek view that the physical body had little (or no) worth. Just like throughout the rest of the letter, the Corinthians were influenced by worldliness.

15:23-24, “Then comes the end”: Schreiner says, “The end could be construed as taking place immediately such that the end arrives when Christ comes. The word Then (eita) may denote a sequence with virtually no time interval… Certainty is impossible, but since Paul nowhere else refers to a millennium or an interval between Christ’s coming and the end, the end here should be understood as occurring when Christ comes” (313).

The only downside has to do with the series’ layout: there is no subject or verse index.

Of course. Do yourself a favor, and whether you are a pastor, a student, a biblical scholar, or simply a layperson who would just like to understand 1 Corinthians, pick up this book. Schreiner writes clearly and succinctly. He draws out the theology of 1 Corinthians with ease, and his humility shows throughout the book. Not every point can be explained (e.g., what does it mean that the Son delivers the kingdom to God the Father in 1 Cor 15:25?), but for that you can move on to larger works. If you wanted to pair Schreiner with a larger, exegetical commentary, you could go with Ciampa/Rosner (PNTC), Garland (BECNT), Gardner (ZECNT), or Thiselton (NIGTC).

Find it on Amazon!