Why does Proverbs 1–9 present a father instructing his son against a strange (or “foreign”) woman? Are daughters not important enough to learn and receive wisdom? Why must folly be presented as a woman? And why is the woman portrayed so poorly in certain proverbs (21.9; cf. Eccl 7.25–29)? Also, the only female character in Job, his wife, urges Job to “curse God and die” (Jb 2.9). In his chapter “Wisdom and Gender” in his new book, The Fear of the Lord is Wisdom, Tremper Longman states, “One cannot deny that they [Proverbs, Ecclesiastes, and Job] are male-oriented… though it is also the case that some elements within these books empower women” (202).

First of all, though the father is instructing the son, he puts his wife’s instructions on the same level as his:

1.8–Hear, my son, your father’s instruction,
and forsake not your mother’s teaching

6.20–My son, keep your father’s commandment,
and forsake not your mother’s teaching.

It was extremely rare in the Ancient Near East to acknowledge the mother in this way, putting her instructions as authoritatively equal to the father’s. Other proverbs emphasize respect for one’s mother:

but a foolish son is a sorrow to his mother.

but a foolish man despises his mother.

At the beginning of Proverbs 31, King Lemuel offers a teaching which he received from his mother:

31.26–The sayings of King Lemuel—an inspired utterance his mother taught him.

This comes before the well-known section on the Proverbs 31 Woman—a section that is not about a wife whose sole purpose is to pop out babies and stay home all day making sandwiches. Rather, she is a “noble woman.” Walter Kaiser says that the noble woman

is depicted as a competent manager of goods and real estate, an expert business woman in cottage industry, a competent mother and wife, and a personwith a strong sense of personal worth able to carry out her sphere of authority with resoluteness and great efficiency.

She is full of practical knowledge, wisdom, and social skills:

31.26–She opens her mouth with wisdom,
and the teaching of kindness is on her tongue.

31.28–Her children rise up and call her blessed;
her husband also, and he praises her.

In the Song of Songs, the Shulammite woman speaks just over half of the time. Although not the author, her voice is filled with import and significance.

Longman states that in the garden of Eden, “God created woman from the man’s side, clearly indicating their equality. The woman is not created from Adam’s head as if she is superior or from Adam’s feet as if she were inferior, but from his side, showing mutuality and equality” (206). He then notes that Eve was created as Adam’s “helper” (Hb, ‘ezer) though it might be better to translate that word as “ally.” In his relationship to Israel, God is also referred to as ‘ezer (Pss 33.20; 89.18–19; Deut 33.19) so it does not denote an inferior status. Adam and Eve had a joint task in guarding the garden of Eden.

Proverbs and Ecclesiastes “adopt the ancient Near Eastern practice of fathers instructing their sons,” and these two books reflect the patriarchy of the time (207). We live after in a different redemptive-historical time, which is post-Christ’s death and resurrection. Longman argues that when a woman reads Proverbs 21.9, she should substitute the word “woman” for “man.” In a footnote, Longman believes that parents took the content of Proverbs and taught them to their daughters also. Why allow the sons to be wise with money (17.16) but not the daughters? Surely, being in covenant with Yahweh who redeemed them out of Israel, parents would want their daughters to be wise, righteous, and godly.

Patrick Schreiner, in his new book The Kingdom of God and the Glory of the Cross, says that the father, king Solomon (Prov 1.1), is teaching his son the wisdom and understanding (1.2) which stems from God’s instructions (Deut 4.6). The kingly father is “training him to be the ideal king who establishes David’s forever dynasty. The good king will rule in wisdom and righteousness by obeying the Torah. He is to decree laws (Prov. 16:10), execute justice (Prov. 31:8–9), and pour out wrath on evildoers (Prov. 16:14)” (70). If that is the case, then it makes sense why a son is being spoken to. On the one hand, even the other males wouldn’t fit this category for none of them were in the line to rule. On the other hand, the king was to display wisdom, understanding, justice, and righteousness to Israel so that they would follow suit. Both men and women could know and apply Proverbs to their life.

Lady Wisdom and the Noble Woman

What about Lady Wisdom found in Proverbs 1–9 or the noble woman in Proverbs 31.20–31? Longman says that woman can switch the genders to Manly Wisdom and the noble man (cf. Ps 112 which resembles Ps 31.20–31). Many may already be doing this. Why is wisdom portrayed as a woman? Because the father is talking to his young son. He portrays wisdom and folly as women to keep his sons interest while presenting them in their proper forms. What I mean is that Dame Folly is presented as seductive, loud, and lazy, sitting at the door of her house and calling men over (Prov 9.13–15). That is foolishness. That is a sluggard. Those who follow the way of foolishness (and those who do so by literally going to commit adultery) will cost them their lives (especially when the spouse comes home, see 7.20, 23). Dame Folly stands for the false gods

Lady Wisdom, by contrast, builds her house (9.1). She slaughtered her meat and mixes the wine for a banquet (v. 2). She sets the table and sends out invitations (vv. 2–3). She works. She has practical knowledge and knows how to get things done well. Rather than eating in secret (v. 17), the way of wisdom provides an opportunity for joy at a public banquet. Longman adds, “Woman Wisdom stands for Yahweh’s wisdom, indeed for Yahweh himself” (250).

Whether male or female, wisdom calls and says,

(You can read my review here). 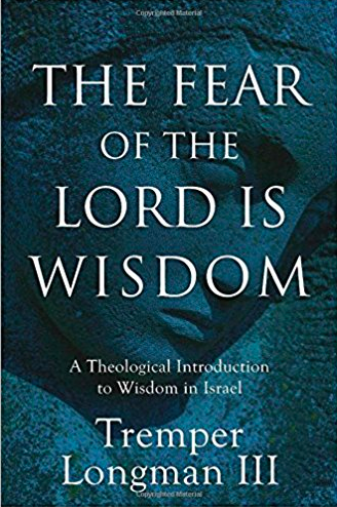 Buy it from Amazon or Baker Academic