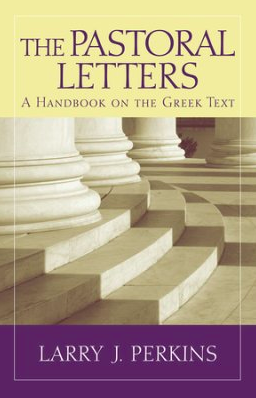 The Baylor Handbook on the Greek New Testament (BHGNT) series is like a prequel, so to speak. When you as a pastor, or professor, or interpreter arrives at your text, you first translate your text. Then you turn to Wallace, Robertson, or any number of other grammars to tease out the details before you turn to your own exegesis. Now that you’ve done your own work, where should you turn next? This is where the BHGNT comes in. Before you turn to another commentary, and after you’ve done your own grammatical analysis, you pull open Larry Perkins’ The Pastoral Letters to double-check your work or perhaps to see what he says on a particularly sticky issue. Your order might go something like this:

I’ve placed exegesis after Perkins’ BHGNT volume because you may want to double check your grammatical and translational work before you go ahead with your exegesis.

The BHGNT series deals with parsing, grammar, syntax, semantics, discourse (using Runge, but it mostly remains on the sentence level), and some text criticism. If you’ve ever scoured certain exegetical commentaries (e.g., BECNT, NIGTC) looking for answers to your specific Greek questions, you may have come away disappointed.

In his introduction, Perkins doesn’t explicitly come down on who the author of the Pastoral epistles is, but he does say, in his opinion, that “the Greek idiolect employed in these letters fits comfortably in the sixth decade of the first century,” in the final years of Paul’s ministry (ca. 63-65 A.D.) (xix). Household codes were commonly written about in this period (Perkins points to Aristotle, Politics, I.1253b1-13). Paul takes this motif and puts them into his letters to show how God’s household should live before the world. “Approved conduct in God’s household … is foundational for the accomplishment of the church’s mission… [and it] refutes the claims of false teachers” (xxii).

Perkins lists fourteen different kinds of rhetorical features in these three letters, such as: alliteration, asyndeton, hendiadys, paranomasia, periodic sentence, polysyndeton, and more. Deponent verbs are written as middle verbs as scholars have been working on understanding these verbs within their historical context. Perkins gives thirteen different semantic categories for middle verbs which appears in these letters. He has two sections on the use of the article with κύριος and with πίστις and a section on the meanings of οἶκος and οἰκία (xxviii-xxxi).

1 Tim 2.11, ἐν πάσῃ ὑποταγῇ: Manner. The sense of πάσῃ is ‘complete’ and suggests an elative idea. The noun ὑποταγῇ defines the relational posture in such learning contexts. It indicates a deferential attitude that recognizes the authority of the teacher and places a learner in the proper rank or order with respect to that authority. The nature of the deference offered will vary with the situation and the relationship. (43).

1 Tim 2.12, αὐθεντεῖν: “Pres act inf αὐθεντέω …. Baldwin’s analysis … given that the verb functions transitively here, suggests that it probably means ‘to compel, influence,’ or ‘to control, dominate.’ If this infinitive is understood as providing a more specific description of prohibited behavior (n.b. the repeated reference to ἐν ἡσυχίᾳ), a domineering or controlling exercise of authority exhibited by some women in teaching may be the activity prohibited in this verse. (44)

1 Tim 3.11, γυναῖκας: “Accusative subject of the implied infinitive εἶναι. This accusative plural noun continues the series begun with ἐπίσκοπον and followed by διακόνους (3:8). Debate arises over whether γυναῖκας refers to women who function as διάκονοι, to wives of the candidates for this function, or to women filling a function different from a διάκονος. The use of ὡσαύτως in v. 11 suggests another category similar to or belonging to διακόνους. (64)

Titus 2.11, πᾶσιν ἀνθρώποις: “Dative of advantage. This dative may also function as the indirect object of ‘επεφάνη, but its placement after σωτήριος suggests that it qualifies this adjective (i.e., “bringing salvation to all people”). πᾶσιν has an inclusive sense (i.e., “all people without exception”). (267-68)

Titus 2.13, τοῦ μεγάλου θεοῦ καὶ σωτῆρος ἡμῶν ⸂Ἰησοῦ Χριστοῦ: Perkins says that “the Granville Sharp rule … seems to apply here” (270). Further down the page he adds, “If the analysis of the previous genitives as part of a TSKS construction is plausible, with this last expression the writer leaves no doubt as to whose glory is going to be revealed and equates Jesus Christ with ‘our great God and Savior.’”

Perkins refers to different grammarians and studies such as Campbell, Moule, Pennington, Porter, Runge, and others. Perkins covers every word, even if just to provide a curt description, while other words will receive a hefty paragraph. This book brings together the best insights to figure out the meaning and function of words. It is not meant to explain Paul’s flow of thought (at least, not broadly) nor how one section relates to another. It is an in-depth look at how the Greek works so that you can understand what Paul is saying before you move on to your own exegesis.

If you’re preparing for a sermon or a Bible study, if your learning Greek, or if you’re trying to keep the rust away, get Perkins’ volume on the Pastoral epistles and grow in the knowledge of God’s word (and the struggle of wrestling with Greek).

Disclosure: I received this book free from Baylor University Press. The opinions I have expressed are my own, and I was not required to write a positive review. I am disclosing this in accordance with the Federal Trade Commission’s 16 CFR, Part 255 http://www.access.gpo.gov/nara/cfr/waisidx_03/16cfr255_03.html.