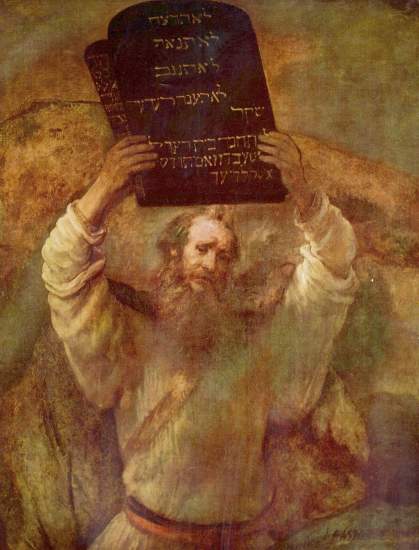 If you grew up in church like I did, you probably memorized (or at least you were supposed to memorize) the Ten Commandments found in Exodus 20. I don’t remember much of what I was taught from those years (considering this was twenty years ago) beyond flannel graphs, sticky stars, and songs by a large donut and a (p)salty book. What I do remember was that in all of the pictures I saw, the Ten Commandments were pretty short.

Regardless of what I did (or didn’t) remember, three things are wrong with this picture.

Is This a Problem?

As many will say, this is a problem. As the blogger Holeybooks says after commenting on the two accounts of the Ten Commandments, “Needless to say, it is quite odd that the Bible itself, if it is putatively a consistent work, would have two different versions.”

Christians are usually given only three options:

Other “problems” can be read about here, here, and here.

“Here, we have the reason why the Lord God ‘commanded’ them to observe the sabbath.

Deu 12:15 – because God brought them out of Egypt, He commanded them to observe the Sabbath” (quoted verbatim).

So according to which reason was Israel supposed to keep the Sabbath? Because God rested on the seventh day? Or because God brought Israel out of Egypt?

In his book The Gospel According to Moses, Daniel Block takes issue with this theory. People can take the Bible and twist it into whatever they want it to say. Without the proper information, this puts many Christians in a tight spot. We believe the Bible to be the inerrant word of God, but yet we don’t know why these two accounts differ. Maybe one of these accounts really is wrong?

As I stated before, I think the problems here can be countered with a proper understanding both of who Moses was and of the situation he and Israel were in. I’ll give my thoughts on Commandments #5 (Keeping the Sabbath) and #10 (Don’t Covet) in a series of posts. And, since many of the biblical laws are so far removed from our culture today (which was influenced by Christian values), the final post will look at a few laws in Deuteronomy and how they were given to benefit and raise the status of women in Israel.