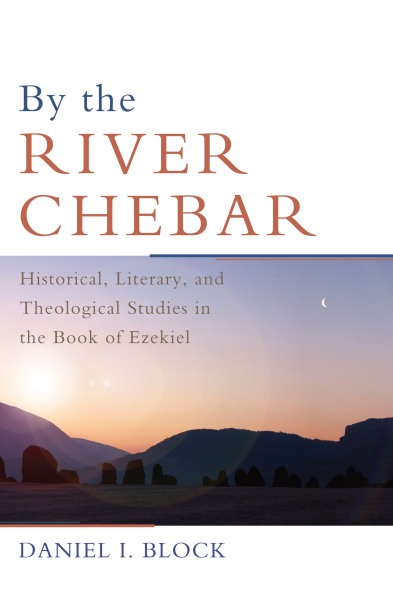 Have you ever read through Ezekiel? Forty-eight chapters of wheels within wheels, whoring Israelites, dead bones coming back to life, and a God who makes Himself known all throughout the book. Yet if God states how He will make Himself known over 70 times throughout the book (most often in the form of “And they will know that I am YHWH”), how come so many people lack an understanding of the God Ezekiel presents us with? And what, if anything, can we do to understand Ezekiel’s bizarre book in today’s world?

In comes Daniel Block’s By the River Chebar where we get a semi-broad/holistic perspective of the history, literature, and theology of Ezekiel. If nothing could sound more boring, then don’t worry. It’s the furthest thing from the truth. Block knows that to interpret the Hebrew Bible one must ask at least three questions: (1) What does the text say?, (2) What did the text mean to the original audience, (3) What does the text mean to me, and (4) What does the text say it like that? This is extremely important, for without understand Ezekiel’s world and culture, we will never understand Ezekiel’s prophetic book.

Yet, one can’t say that Block doesn’t understand the average reader’s disposition when reading Ezekiel. In the preface Block states, “After living with this prophetic priest for fifteen years I sometimes felt like I knew the man personally; at other times he left me totally bewildered by his utterances, if not angry over his portrayal of God” (ix). Block knows the difficulty in reading Ezekiel, especially his first chapter, which is attested to in chapter 8 “Text and Emotion: A Study in the ‘Corruptions’ in Ezekiel’s Inaugural Vision (Ezekiel 1:4-28).” While the essay consists of 24 pages, really only 6-7 pages would prove difficult to understand for the average reader. On the other hand, Hebraists would enjoy Block’s exposition of grammar and style.

Yet, not to worry, Bock gives an alternative approach and looks at the nature of Ezekiel’s experience compared to that in Ezekiel 10 just one year later. If you saw a crystal platform, a glorious throne, and wheels/vehicles moving about, don’t you think you’d be a bit dumbfounded too? We look at other texts to see their similarities and contrasts, showing just how unique Ezekiel’s experience really was.

Can Ezekiel Be Preached?

But, before I make this book sound too dense for any reader interested in Ezekiel, I’ll start off by saying that this book is, in some respects, pastoral. I can say that because the very first chapter is titled “Preaching Ezekiel.” Block stresses the importance of knowing the prophet, his audience, the nature/structure of the book, and his message. Block doesn’t leave us hanging however, for any pastor (or anyone) who’s ever had a hermeneutics class knows to look for this. The reader is provided with information on the prophet, audience, structure, and message. Much of Ezekiel’s statement are so shocking because his audience is equally hard hearted, being characterized as “a rebellious house,” with “obstinate face,” “stubborn heart/mind,” “stubborn of forehead,” “obstinate of heart/mind,” and “resistant to messages from God” (p 5).

Block ends with giving us (and the pastor) a case study of preaching the Gospel in, of all sections, Ezekiel 16.1-14. Ezekiel 16 and 23 are significantly difficult and shocking chapters in Ezekiel. Block succinctly shows the reader how to find the gospel in Ezekiel 16, how God deals with His chosen people, and how it mirrors the way He deals with humanity, all without straining the text.

A holistic approach looks at the parts that make up the whole. While I don’t have time to delve into every chapter (though I plan to make a post or two about them), I would at least like to give you a quick summary of each chapter.

*2). “The Theology of Ezekiel” looks at themes in Ezekiel in his visions of God, the people of God, and the Messiah.

3). “The God Ezekiel Wants Us to Meet” has us looking at a loving and compassionate God, as opposed to many (usually [or always?] more liberal) commentators who view God as nothing but “obsessive” and “raging” (p 45).

4). “Divine Abandonment” shows how Ezekiel uses familiar texts/traditions from other cultures to show Israel their own blindness and perversions. YHWH is not bound by other gods, but remains free to move and chose and rule as He wills. And when He choses to save His people, no one will stop Him.

6). “The Prophet of the Spirit” looks at Ezekiel’s use of ר֫וּחַ (ruach) and what it shows about God’s power in, over, and through Ezekiel and in bringing about a New Covenant people.

7). “Beyond the Grave” looks at the way death and the afterlife is portrayed in Ezekiel, how much of it is a rhetorical use of the culture around Israel against the rebellious house of Israel, and what it determines about a Christian belief in the afterlife.

9). “Ezekiel’s Boiling Cauldron” shows how Ezekiel uses a song (perhaps sung by the Israelites left in Jerusalem) as a scathing attack against the Israelites to open their eyes to their disillusioned beliefs of God favoring them over the exiles in Ezekiel 24.1-14. We see that this is not at all the case, and in fact, God will be a tabernacle to the exiles (Ezek 11.16-20), not those left in Jerusalem (11.21).

On the one hand, if you interested in Ezekiel, I would say simply to look up Block’s two-volume commentary from the NICOT series (Ezekiel 1-24, 25-48). For as good and dense (scriptural references!) as this book is, it doesn’t cover it all. Though what it does it, it covers well.

However, there are still some sections that I felt didn’t provide me with much more knowledge on Ezekiel.

1). You don’t need to know Hebrew, but if you do know it, you will gain a wealth of knowledge from this book. Chapters 6-9 (“The Prophet of the Spirit,” “Beyond the Grave: Ezekiel’s Vision of Death and Afterlife;” “Text and Emotion” [mentioned above], and “Ezekiel’s Boiling Cauldron: A Form-Critical Solution to Ezekiel 24.1-14”). A decent grasp of the Hebrew language will bring much more to light in these chapters. I wish I knew Hebrew just for these chapters. But even despite my lack of knowledge on the Hebrew language, these chapters still had much to provide, and I did enjoy them. I will say that, in a book like this, I was surprised at how much I understood in each chapter.

2). The two excursus (mentioned in the third paragraph) and chapter 5 “Chasing a Phantom: The Search for the Historical Marduk” were difficult reads. Excursus A is simply a recovered speech of Marduk. Excursus B is in Hebrew. Chapter 5 is a look at who the god Marduk was believed to be and how he rose to power (aka popularity) in Babylon and in the pantheon of gods. Chapter 5 may give assistance when studying Ezekiel, but, unlike the rest of the chapters, I feel like I know little more about the book of Ezekiel than I did before.

I enjoyed Block’s How I Love Your Torah, O Lord! (read my review here), and I enjoyed this book much more. As I’ve already stated, I was surprised by how much I was able to understand. HILYTOL was enjoyable, though had plenty of Hebrew to go around. BTRC had much less Hebrew (even in the harder chapters nearer to the end), and was more broad than HILYTOL. The texts weren’t as specific, and I feel like I have a better idea of Ezekiel as a whole, and would very much like to read Beyond the River Chebar. This isn’t light reading (by any means), but this is recommended. It helped me to want to dig into Ezekiel more, and eventually buy Blocks’ 2 Volume set! One day.

[Special thanks to Wipf and Stock for sending me this book for review! I was not obligated to provide a positive review in exchange for this book.]