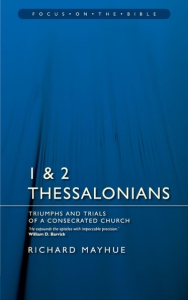 1 & 2 Thessalonians are letters written by a compassionate and concerned pastor to a church censured by their own community. They are letters about the “triumphs and trials of a consecrated church.” Having turned from gods to serve the true and living God, in a society where the people think that their gods are the reason they are a free city, leaves the Thessalonians under the guise of uncivil atheists, a cancer to their society. The Roman gods gave the people their status as a free city. How dare these Christians turn from those gods?

Paul started the church in Thessalonica, but in a matter of weeks (or months) envious Jews ran him out of town (yet again). Now the relatively young church must stand against the discouragement from their neighbors, family, and used-to-be companions. So Paul sends them two letters (along with Timothy) to the church of Thessalonica.

The Focus on the Bible commentaries focus on being “readable, reliable, [and] relevant,” and so that makes this commentary more on the devotional side. And this isn’t a bad thing, because while some other commentaries focus more on exegetical issues (word placement, greek syntax), converse with the ideas of other commentators, or comprehensive ancient Roman customs ranging from 200 years before*, Mayhue cuts to the chase and speaks more on what Paul says, why he says it, and where else we find that idea scattered throughout the Scripture.

*This isn’t to say that the subjects covered by other commentators are wrong or uninteresting, but not everyone is giddy with excitement to read quotes from Seneca’s “De Brevitate Vitae” and how his reasons for the importance of morality can be compared with the writings of the New Testament**.

**I don’t know if any one has compared the NT moral standards with any of Seneca’s writings. Someone probably has, but it’s just an example.

As I said before, this Mayhue’s commentary is more devotional for the reader looking for direct, applicational meaning. It is not a technical, exegetical commentary. Mayhue starts off his commentary with a timeline of Paul’s ministry, a map of his second missionary journey, a timeline of the futuristic premillennial view, and then his introduction to Paul’s two (perhaps earliest) letters. In here he covers Paul’s travels from the Jerusalem Council (Acts 15) to Corinth (Acts 18). He covers the usual Authorship (Paul), date of writing, audience, and purposes for writing, all of which are important for the reader to know. At 16 pages long, this section is important for it covers the backgrounds and reasons for Paul’s actions in Acts, why he had to leave Thessalonica so soon, and why he chose to write two letters to them (he loved them and they needed it!).

Leaning more toward the devotional side, Mayhue takes a closer look at particular words that appear in Paul’s letter. What does it mean “to serve” something like “idols” in 1 Thess. 1:9? Mayhue takes a look at both phrases and how they are used through Scripture. As far as I can tell Mayhue rarely/never uses Greek phrases, keeping the book fluid for non-Greek readers. On occasion he’ll touch on a Greek word to explain it’s use in the verse and other verses for a fuller possible meaning.

Mayhue adds a lot of gray, boxed-out “Overview” sections in his commentary, and they’re pretty helpful. These sections are discourses on a particular subject Mayhue mentions in the text. Rather than talk about them in the text, you can by-pass the gray Overview box and return to it after you are finished reading. They are topics such as how the Day of the Lord is spoken of in the Old and New Testaments, facts about the resurrection, titles of Christ, what it means to know God, first century AD expectations of the coming Messiah, and more.

There are study questions at the end of each section. These are helpful whether you are using this book in a classroom, a home group Bible study, or for your own devotional time. They are not just posed to the reader for information, but for reflection. The Bible should change us, not simply give us more information to spit out. It is informational and transformational.

This is a Dispensational pre-tribulation take on 1 Thessalonians. So being a dispensational, premillennial look at 1 and 2 Thessalonians, Mayhue takes the view that the rapture takes place before the Great Tribulation. His arguments are sound, he gives plenty of Scripture to look at in his defense, and he adds two appendixes at the end of the book (1: Different Millennial Views and 2: The Time of the Rapture).

However, Mayhue let’s the reader know that it is his own opinion. He says that no one knows the times nor the seasons (Acts 1:7). But we do know enough to know how to produce a godly lifestyle. While Mayhue takes a pre-tribulational view, he doesn’t make any claims to know the day or the hour of Christ’s coming (Matt. 24:36) except that it would be before the Great Tribulation.

One thing I didn’t particularly care for was the way the book is divided. Not the way Thessalonians is outlined, but the way the sections in the book were separated. When Section A ends, the next paragraph begins Section B. This is only an issue because the Headlining font is not much different than that of the rest of the book. It might be italicized or in bold, but it’s not any (or much) bigger than the rest of the words. As you flip through, it’s hard to tell one section from the next. This is only a minor problem though that everything feels to run together. There is at least a sectional guide on the top of each page that includes the range of verses in view so you are not without hope.

Though I haven’t looked at any other Thessalonian commentaries (besides the NIVAC which seems to be pretty good), Mayhue does a good job in this devotional commentary. You get some history, some of the flow of Paul’s argument, fuller word studies, and it would be good to use for a Bible study setting, Sunday school, or, of course, your own devotional time. If you aren’t a dispensationalist, then you may want to look elsewhere (though, no doubt, this would still be helpful). If you are a dispensationalist,  if you have no idea, or if just don’t care, and you don’t want a commentary that goes too in-depth, then this might just be for you.

[Special thanks to Derry at Christian Focus for sending me this book for review! I was not obligated to provide a positive review in exchange for this book.]