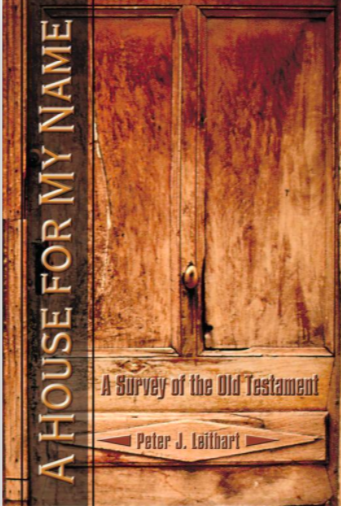 I’m starting this review off a little backwards. I have a lot to say, but I’ll start by saying what this book is:

“I encourage parents not to underestimate what children can learn about the Bible. Unlike many books of theology, the content of the Bible is fairly easy to grasp. Even (especially?) a two-year-old understands what happens when someone’s head is bashed with a tent peg. If trained to read properly, children can begin to see how parts of the Bible are connected to each other and to one big story” (pg. 15).

And that’s what Leithart seeks to do in this book, and he does it well. The Old Testament, as a whole, is a story. Each book is it’s own story, but each book relates and builds on other books. I enjoyed reading this book, and always came away with new insights and nuggets that I did not know before. If you’d like too see a picture of how the Old Testament is a unified story, get this book!

Now before I start trying explaining this book in this section, here’s the rest of the review.

“The whole Bible tells a story” we are often told. The Old Testament points to Christ, and the New Testament tells about this new age and salvation that he has ushered in. But how come the Old Testament is so darned hard to read? Genesis is mildly interesting when you aren’t reading the genealogies, and Exodus is an imaginative experience with plagues of locusts and hail falling from the sky and which paints a picture for us to see God as a consuming fire on top of Mt. Sinai, One who is great and mighty and should be feared. But then we read laws, building regulations, and more laws up until the end of Deuteronomy (with a few interesting judgment stories of self-seeking rebels in Numbers [16] and some bits of narrative-retelling in Deuteronomy).

Joshua has some awesome battles, but then there’s a twelve piece land giveaway that borders on the side of tears in your daily devotional. Why is Judges even in the Bible if, for the most part, they weren’t any good? Deceit, tent pegs, greed, child sacrifice, self-focused sexual desire. They’re just as bad as the people they lead! (Hmmm….)

If we already have the books of Samuel and Kings, do we really need Chronicles too? And aside from promises about an eternal covenant, God being our God and us being His people, and some scathing rebukes to rich ‘cows,’ what do the prophets even mean? Yes, I should care for the poor, widowed, and orphaned, but what does another judgment on Egypt, Philistia, and Mount Seir have to do with me?

Because the times of the Old Testament are so far removed from us, many liberals have said that Christian theology has “superseded” that of the OT theology causing us to no longer need the Old Testament. There’s nothing left to be found in it. In fact, it is the seed that grows into our knowledge of Christ once he comes (came) and fulfills (fulfilled) the OT.

But there is a way to read the Old Testament that is of benefit to Christians today. We don’t rip out the OT for a reason. Paul says it’s still holy Scripture breathed out by God and is profitable for our Christian living.

So how do we read the OT? Like a book that has a point, the highest of which is to glorify God and direct us to His Son, the coming Messiah. But there are also themes and motifs seen throughout these books. For example, in the books of Samuel we see a motif (theme) of the “spear.” First the Israelites don’t have spears except for King Saul and his son Jonathan, but all of the Philistines do, one in which is Goliath. Goliath has a spear and is an enemy of David and God. Soon after Goliath’s death, the “spear” motif is seen with another: Saul! Just as Goliath was the enemy of both David and God. “As Samuel warned, Saul…is a king like the kings of the nations; he acts like a Philistine giant” (pg. 33).

There are 8 chapters (he’s even fine with you skipping the Introduction since it is the most “egg-heady” section of the book. Although even the intro is interesting 10 pages in where he starts to law done “rules of engagement” in reading the OT).

The 8 chapters I spoke of are as follows:

I don’t have the time to elaborate on all 8 chapters. You might as well just read the book. But hopefully I can hold or pique your interest in a few nuggets from this book.

I’m King of the World

In Genesis 1-2 Adam’s job is to “rule” and “subdue.” In the OT the word “subdue” is used to describe a victory in war (David) and subduing one to slavery (Jer. 34:11, 16; 2 Chron. 28:10). Adam is to make the world pleasing to God, to multiply and fill the earth, growing the garden of Eden (the first “temple”) so that the earth would be filled with the knowledge of the Lord as the waters cover the sea (Hab. 2:14). As King of the world (since he is the head of humanity), if he subdues the earth he will be building a house for God within the house that God has built for him.

Later, we see God promise to build David a “house” (eternal lineage, where the real temple of God will not be a building but a people among whom he will dwell), and “once He has built the house for David, David’s son will build a house for Him,” a house that connects heaven and earth, the true tower of Babel (pg. 148). The future history of the world is bound up with the Davidic dynasty through which the Messiah would come.

What’s the deal with Moses’ 40 year wandering before he met up with Pharaoh? What it God’s longterm way of dealing with a prideful Moses who was a bit too eager to save his people from the Egyptians? Perhaps. Perhaps not. But when Moses went to “visit” his Hebrew brethren, we don’t know if this is the first time he has done this. When God “visits” His people, it’s with the intent of saving them and destroying their enemies (Ps. 106:4). Moses intends to bring Israel to salvation.

Moses murders the slave-driving Egyptian, acting “on the principle of ‘eye for an eye, tooth for tooth, stroke for stroke’ (pg. 76). Stephen says that this was an act, not of brutal murder, but “vengeance on behalf of the oppressed” (Acts 7:24). Moses, being a prince and ruler in Egypt, is permitted to do this, to stand for justice.

However, Moses gets a taste of how Israel will treat their future savior. Soon he tries to stop a fight between two Israelites, but they don’t want Moses as prince and judge over them (Ex. 2:14). So Moses goes to Midian, one, because Pharaoh heard about this and planned to kill him, and two, because God was judging Israel for her sins. Their salvation is delayed for a generation because they do not accept Moses. Stephen tells the Jews they are “doing just as your fathers did. Which one of the prophets did your fathers not persecute?” (Acts 7:51-52).

Jesus, Our Messiah, Our Fulfillment

The Mosaic order of water and purification cannot heal. Yet Jesus heals a man who has been sick for 38 years (the same amount of time Israel was in the wilderness; Deut. 2:14).

Moses is the leader of the people who received the manna, whereas Jesus is manna (and even still people grumble against Him – Jn. 6:41, 43, 61).

A river flows from the Garden of Eden (2:10), meaning Eden is uphill. Water, trees, and a man and woman on a mountaintop are features of the Garden that come up over and over later in the Bible. Abraham’s servant finds Rebekah for Isaac while waiting at a well (Gen. 24:10). Jacob meets Rachel at a well (Gen. 29:1-12). Moses fights of shepherds attacking Jethro’s daughters at a well and ends up marrying on of those daughters (Ex. 2:16-22). We see garden scenes, a man, a woman, and animals. “The patriarchs are new Adams with…new Eves who are to be fruitful, multiply, rule, and subdue” (pg. 54). In John 4, we see Jesus meet the Samaritan woman at a well while discussing marriage, everlasting life, and true worship with her.

No, they don’t get physically get married, but Jesus, the True Adam, discusses the spiritual marriage between the Bridegroom and His bride, when the earth will be filled with the knowledge of the glory of the Lord, as the waters covers the sea.

Pretty much the whole book.

Leithart does an excellent job in showing the comprehensive story of the Old Testament. Books relate a growing theme, a typology (what God typically does) that culminates in Jesus Christ.

Usually the allusions to other parts of Scripture are clear and insightful. Yet there are still instances where more references would have helped solidify Leithart’s case. On page 115, Leithart mentions Gideon, the fleece, and the Holy Spirit. Yet was Gideon really a picture of being clothed with the Holy Spirit, or was God simply giving mercy to an unbelieving Gideon?

Leithart later says that because the Old Testament sometimes spoke of “the sea” as Gentiles, Jesus showed he accepted Gentiles when he ate seafood. While the OT did poetically speak of Gentiles at times, I don’t see how it means Jesus’ love for shrimp scampi shows his acceptance of Gentiles.

Instances like this are very few and far between, and are usually very brief.

[Special thanks to Gene at Canon Press for sending me this book for review! I was not obligated to provide a positive review in exchange for this book.]