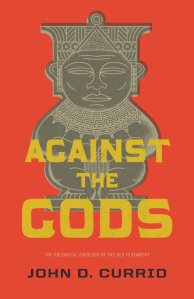 It’s purpose is to emphatically demonstrate the distinctions between the worldviews of the Hebrews and the rest of the ANE.
+

For example: At the end of chapter 3 Currid shows what it meant for Genesis 1-2 as a creation story to be a polemic against other ANE myths.
+

No. Not to most people.
If you’re a teacher who wants to know more about ANE parallels with the Bible, or a student who has a Bible-bashing college history teacher, then sure, this book would be of help.
But most people just won’t want to read this book, especially when there’s more ANE information than polemical detail available.
+
For most people, just listen to iTunesU: Crass Plagiarism. These three 30-40 min. lectures are very interesting, short, and were the reason I wanted to get this book. You’ll learn a lot from them.
+

[P.S. Thanks to Crossway for allowing me a free copy to read and review! The words expressed above are my own opinion of the book. Page numbers are from the Adobe Digital Editions version.]