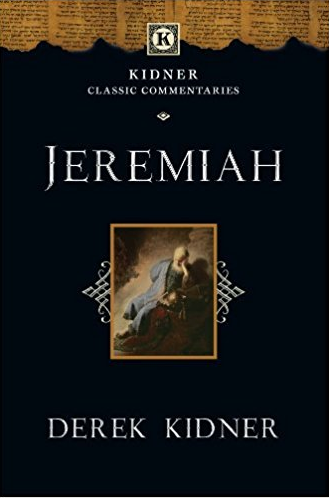 During his lifetime, Derek Kidner (1913-2008) was a prolific commentator for the TOTC and BST series. He wrote commentaries on Genesis, Proverbs (review), Ecclesiastes, Ezra & Nehemiah, Hosea, and two volumes on Psalms (review of Pss 73–150). His pastor’s heart and his OT scholarship come out in all of his commentaries. He’s pithy, wise, discerning, and easily draws his readers to look to Christ in the NT.

Kidner has Old Testament wisdom/skill (ḥokmâ) when it comes to exegesis and application. One can observe his pithiness in this commentary—Kidner explains Jeremiah’s 1,364 verses in only 150 pages! While many other commentaries explain everything almost to the point that you no longer need to look at the biblical text itself, a reading of Kidner requires an open Bible.

Kidner divides Jeremiah into 3 units according to historical dates.

At 150 pages, Kidner’s Introduction is a mere 9 pages, though it gives the surrounding historical context. That context is vitally important in a book that dates many of its passages, they just aren’t usually in chronological order. Knowing the dates and the historical events in Kings and Chronicles (references also given throughout this volume) brings more life to Jeremiah.

Kidner points out the irony in Jeremiah’s statements against his opponents. In Jeremiah 7.8–15, concerning Jeremiah’s appeal to reason and to history, Kidner says,

Its first step is to expose the nonsense — and the effrontery — of tearing up the ten commandments and turning up in church (10), as though saved to sin. The second, the den of robbers saying (11), brings out the greater nonsense of thinking to tie God’s hands. The temple could only give sanctuary as a sanctuary. Let man take it over, and God will have left it (49).

When Jeremiah’s cousin Hanamel comes to him in prison and asks if he would redeem and purchase Hanamel’s land (it was probably inhabited by the Babylonians at this point and, thus, was basically worthless), Kidner replies, “Was there ever a more insensitive prison-visitor?” (112). And should we expect anything less? His family plotted against him (12.6). Why should we expect kind words from his cousin? Given that this was of the Lord, Jeremiah bought the measly plot of land as a sign of God’s promise to return his people. Kidner says, “Each [field] a vindication of his [Jeremiah’s] gallant act of faith and of the Lord’s delight in doing [his people] good…. Seventeen shekels of silver (9) were surely never better spent” (114).

His proverbial twists and applicable thoughts express, in a nutshell, God’s words to Jeremiah, his Jerusalem audience, his Babylonian audience, and his present day audience and exhorts and encourages both God’s people and God’s preachers today. In Jeremiah 17.17–18, Kidner writes,

Jeramiah (sp) recalls the warning he received at his commissioning… for dismay [1.17, and “terror” in 17.17] is the word he now dwells on… but we should not miss the note of “fear and trembling” (cf. 1 Cor. 2:3) which was the cost of his outspokenness. It silently rebukes the blandness of the safe preacher (74).

As with Hetty and Wright, there is no Scripture index.

While Kidner’s volume isn’t strong in detailed exegesis, and it won’t be the go-to commentary for many because of it’s brevity, those brief comments give you a taste of each section’s distinct meaning and, ultimately, of all of Jeremiah. Kidner would be best used for both the Bible study and in sermon prep. He’s strong on the historical events of Jeremiah, drawing in the NT, and summarizing the main idea(s) in a section of Scripture.

Buy this on Amazon