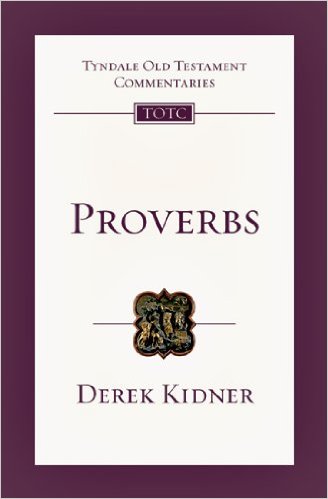 Derek Kidner was a brilliant British Old Testament scholar who taught at Oak Hill Theological College before becoming Warden of Tyndale House. The book of Proverbs (TOTC) is just one of the many commentaries Kidner has written (see here for the full list).

The Tyndale Old Testament Commentary (TOTC) series is almost complete (we’re still waiting for Boda’s Ezra-Nehemiah volume), while the TNTC series has been completed. In general, the volumes in the series are kept at a moderate length, and there are comments to encourage devotional thought. Still it should be said that these volumes are exegetical in nature, and, as Kidner writes, “the meaning of the text must be even a short commentary’s first concern” (9).

Kidner begins his commentary in Part One with a brief study of the Book of Proverbs and the Wisdom of Israel. Wisdom literature was important to Israel (and should be important to us) because “there are details of character small enough to escape the mesh of law and the broadsides of the prophets, and yet [are] decisive in personal dealings” (13). You wife may be beautiful, but is she a brawler (Prov 25.24; 27.15)? Your man might make your sides hurt with laughter, but is he wiser in his own eyes than seven men with good sense (26.16)?

Second comes Wisdom in the Ancient World. The authors of Proverbs likely used both original and material from their Mesopotamian neighbors. Yet the book of Proverbs is set within the context of YHWH who reveals himself to his people. Unlike the ‘Babylonian Job,’ Israel’s Job (and Israel themselves) knew the things that were pleasing to their God. “Egyptian jewels, as at the Exodus, have been re-set to their advantage by Israelite workmen and put to finer use” (24).

Kidner finishes Part One with a survey of the structure, authorship, date, and text of Proverbs.

In Part Two, Kidner shows us a glimmer of Israel’s jewels in a series of 8 subject-studies, reoccurring themes in Proverbs:

These 24 pages were by far the favorite section for Mari and I. “You have to be good to be wise” and “you have to be wise to be really good” (30). Even more so,

you have to be godly to be wise; and this is not because godliness pays, but because the only wisdom by which you can handle everyday things in conformity with their nature is the wisdom by which they were divinely made and ordered” (30).

To not be wise is to be the fool who has “no idea of a patient search for wisdom” and his mind is closed to God. It is to be the sluggard, the figure of the tragi-comedy.  He will not begin, finish, nor face things. Because the sluggard learns not from God-given examples (e.g. the ant), it is far too late for him to learn when he is confronted his own wasted life. The wise person takes note and does not imitate the sluggard. Ever.

In the next section Kidner divides Proverbs into 7 main sections. He looks at the meaning and usage of words, where they are found throughout Proverbs and other OT books, and how a word or phrase might be better translated.

The volume ends with a short concordance 10 pages in length “that helps locate lost sayings (in territory notoriously hard to search) and encourages further subject studies” (9).

Kidner is both clever and concise with his words. Rather than getting a 1,000 page commentary of dense syntactical, grammatical, textual details, one gets a brief comment on almost every verse of Proverbs. This makes the commentary easy to use for devotional reading, as each chapter on Proverbs doesn’t require you to read 30+ pages. Instead, most of Kidner’s chapters run about 5 pages each.

But something must be said about this brevity, a disappointment found by both Mari and I.

While Kidner writes that “the meaning of the text must be even a short commentary’s first concern” (9), I must defer to John Frame who wrote,

Imagine someone saying that he understands the meaning of a passage of Scripture but doesn’t know at all how to apply it. Taking that claim literally would mean that he could answer no questions about the text, recommend no translations into other languages, draw no implications from it, or explain none of its terms in his own words. Could we seriously accept such a claim? When one lacks knowledge of how to ‘apply’ a text, his claim to know the ‘meaning’ becomes and empty—meaningless—claim. Knowing the meaning, then, is knowing how to apply. The meaning of Scripture is its application. (The Doctrine of the Knowledge of God, p. 67).

While I’m sure Kidner would know how to apply the truths of Proverbs, the application is often left on the cutting room floor. To give but one example, on Proverbs 18.8 (“Tidbits of Gossip”) Kidner comments,

Delicious morsels (RSV) is a more likely translation than AV’s wounds; modern scholars agree in deriving it from a verb ‘to swallow greedily’. See subject-study: Words 1 (1), p. 43. The proverb is exactly repeated in 26:22 (121).

When it comes to actual devotional use, this commentary is hit and miss. Sometimes it works, and others times it isn’t. I would like to have seen more of Kidner’s wordsmithing in this commentary, particularly how Christ is the Wisdom of God and how Christian are to use this godly wisdom in their life.

Like apples of gold in a setting of silver, Kidner words are fitly spoken. Yet I wouldn’t recommend this as your first Proverbs commentary. For the same price you could get Duane Garrett’s NAC volume Proverbs, Ecclesiastes, Song of Songs or Eric Lane’s Proverbs volume in the Focus on the Bible series. Kidner will prove helpful on the subject-studies, the outline of Proverbs, and some critical-textual matters. If you want to go even deeper, head over to Longman and Waltke.

Buy it on Amazon or from IVP!