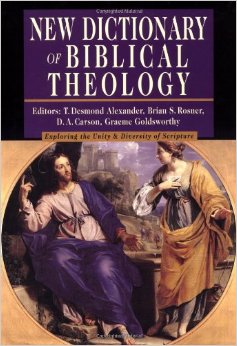 I’m working through the New Dictionary of Biblical Theology right now on my own time (and not as a review). It views the themes of the biblical canon as a whole (a theology of the whole Bible on a particular subject). Here, Carson writes on the topic of Love. I won’t comment on the majority of his post except for this one sub-section titled The thesis that God hates sin but loves sinners.

Whether spoken to extinguish the fires of heated judgment or to evade the guilt of one’s own sin, this is a popular saying among Christians. Yet what are we to think about those psalms which speak of God hating the sinner? Phrases like that, though few, are biblical (for an example, read on). Whereas the assumption that “God hates the sin, yet loves the sinner” is never explicitly stated in the Scripture (but, in some way, by Augustine and, more explicitly, Ghandi). How does God really feel toward the sinner?

There is a small element of truth in this thesis. God always hates sin; he is invariably and implacably opposed to it. And it is true that God loves sinners: God ‘demonstrates his own love for us in this: While we were still sinners, Christ died for us’ (Rom. 5:8; cf. John 3:16). Nevertheless the thesis, with its simplistic antithesis between the personal sinner and sin in the abstract, is mistaken. The same apostle who declares that God’s wrath is revealed from heaven against ‘all the godlessness and wickedness of men’ (Rom. 1:18) also speaks of God’s wrath against individuals (2:5); indeed we are all ‘by nature children of wrath’ (nrsv). The first fifty Psalms repeatedly describe the kinds of people on whom God’s wrath rests, not just the kinds of sin. Indeed, the language can move from God’s wrath to God’s hate and abhorrence: ‘The arrogant cannot stand in your presence; you hate all who do wrong. You destroy those who tell lies; bloodthirsty and deceitful men the Lord abhors’ (Ps. 5:5–6, niv).

None of this means that God’s wrath is arbitrary or whimsical. In Scripture, God’s wrath, however affective, is the willed and righteous response of his holiness to sin. God’s holiness, like God’s love, is intrinsic to the very being of God; his wrath is not. To put the point another way: God has always been holy, as he has always been love; he has not always been wrathful. But where his holiness confronts the rebellion of his creatures, he must be wrathful (and the entire sweep of the Bible’s storyline insists he is), or his holiness is anaemic. Yet for all that he is no less the God of love.

Yes, God did love the world so much that He sent His only Son, but, alternatively, in the end, sin must be judged. God holds wrath against the sinner because of their sin. Whereas, for the believer, the wrath of God toward our sin was revealed against Christ at the cross. Because of this, knowing God in Christ, we are to strive for holiness. To look like our Father who graciously adopted us into His holy family through the death of His Son.

In the coming weeks I plan to write up a few posts (no promises on length nor consistency), but there are a number of topics here that interest me, especially as I become increasingly interested in biblical theology. Being that the term Biblical Theology is not as widely known as one would hope, and since one could study the biblical theology of pretty much every subject in the Bible, there’s enough to keep anyone’s hands full.

Besides that, I’m in Norway now. (This is not my backyard, but I will find it). Mari, her family, and I are gearing up for our wedding celebration in June. Among setting up for that, having family and friends over, and painting a few houses, I’ll have a set of summer reading to go on about, some reviews, some I already own and really need to work through. I looking forward to the reading, the relaxing, the painting, and the mountains.

Listen to Don Carson’s interview on God’s love for the sinner.