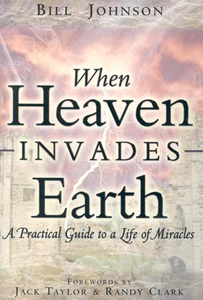 It’s been a few weeks, but I’m finally going to wrap up this review session on Bill Johnson’s famous book. If I haven’t convinced anyone yet of his misbeliefs, hopefully this will do. (If you’d like to be kept up to speed, here are the links to Part 1, Part 2, Part 3, and Part 4).

Be Careful What You Propagate

While He is 100 percent God, He chose to live with the same limitations that man would face once He was redeemed. He made that point over and over again. Jesus became the model for all who would embrace the invitation to invade the impossible in His name. He performed miracles, wonders, and signs, as a man in right relationship to God . . . . not as God. If He performed miracles because He was God, then they would be unattainable for us. But if He did them as a man, I am responsible to pursue His lifestyle (p. 29).

Johnson says Jesus “is 100 percent God,” but then goes on to say “He performed miracles…not as God.” Which is it? Was Jesus God, or not God? We’re going to see more of this double-arguing in another section.

Phil 2.7 says, “but [Christ] made himself nothing, [by] taking the form of a servant…” Jesus was God, and He was a servant. He didn’t set aside His divinity.

This mind that we are supposed to have (Phil 2.5) is making ourselves nothing, but not as if we are gods who become human. We are citizens of heaven (1.27) with our manner of life being how we live out our heavenly citizenship here on earth. Like Christ we are to give up our rights. Christ humbled Himself, served others, died, and was raised and exalted, given the name above all names. We are to do the same thing, and not be walking around expected to do miracles all of the time.

Paul says in 1 Corinthians 12.27-31, “Now you are the body of Christ and individually members of it. And God has appointed in the church first apostles, second prophets, third teachers, then miracles, then gifts of healing, helping, administrating, and various kinds of tongues. Are all apostles? Are all prophets? Are all teachers? Do all work miracles? Do all possess gifts of healing? Do all speak with tongues? Do all interpret? But earnestly desire the higher gifts. And I will show you a still more excellent way.“

Paul himself, apostle by the will of God, says that not everybody works miracles. Not everybody has the gift of healing.

I am responsible to pursue Christ’s lifestyle: one of humility and love to God and my neighbor.

Laying Aside His Divinity

On page 79, Johnson tells us about the anointing of the Spirit, and how ‘Christ’ means ‘Anointed One’ or ‘Messiah.’ “He [Jesus] had to receive the anointing in an experience to accomplish what the Father desired.” A few paragraphs down he writes, “Jesus lived His earthly life with human limitations. He laid His divinity aside as He sought to fulfill the assignment given to Him by the Father: to live life as a man without sin, and then die in the place of mankind for sin.”

When it comes to divinity there is only A or Not-A. One can only either be divine or not divine. If Christ is divine, if that makes up His being, then He can not lay aside His divinity or else He would become something else that what He is.

‘If God laid aside one of his attributes, the immutable undergoes a mutation, the infinite suddenly stops being infinite; it would be the end of the universe. God cannot stop being God and still be God. So we can’t talk properly of God laying aside his deity to take humanity upon himself.‘

If Jesus laid aside divinity, that would be proof that He never had true divinity. Thus Johnson’s doctrine is a de facto denial of the deity of Christ. Christological heresy is heresy. Period.

So what does Philippians 2:7 imply that Jesus did empty Himself of? The answer is not divinity, which is eternal and cannot be compromised, but divine prerogatives. Paul’s point was about Christ’s humility that we should emulate, not His ontological status as God.

‘I think the context of Philippians 2 makes it very clear that what he emptied himself of was not his deity, not his divine attributes, but his prerogatives — his glory and his privileges. He willingly cloaked his glory under the veil of this human nature that he took upon himself. It’s not that the divine nature stops being divine in order to become human. In the Transfiguration, for example (Matthew 17:1-13), we see the invisible divine nature break through and become visible, and Jesus is transfigured before the eyes of his disciples.'”

To go along with Sproul this is why Paul tells us in Phil. 2.3-5 to “Do nothing from selfish ambition or conceit, but in humility count others more significant than yourselves. Let each of you look not only to his own interests, but also to the interests of others. Have this mind among yourselves, which is yours in Christ Jesus.”

Then Paul gives us the perfect example of humility, Jesus, who came in the form of a servant and humbly died on the cross by experiencing a shameful death. If the Divine can humble Himself, then so should we. See Jesus in this light, as the Son of God who humbled Himself to die for our sins, then we are to ” work out [our] own salvation with fear and trembling, for it is God who works in [us], both to will and to work for his good pleasure” (Phil. 2.12b-13).

Or Maybe He Was Divine?

For hundreds of years the prophets spoke of the Messiah’s coming. They gave over 300 specific details describing Him. Jesus fulfilled them all! The angels also gave witness to His divinity when they came with a message for the shepherds: “For there is born to you this day . . . a Savior, who is Christ the Lord.” Nature itself testified to the arrival of the Messiah with the star that led the wise men. Yet with this one statement, “Unless I do the works of the Father, do not believe Me,” Jesus put the credibility of all these messengers on the line. Their ministries would have been in vain without one more ingredient to confirm who He really was. That ingredient was miracles (p 93, PDF, emphasis mine).

No, instead I think it’s more likely that Johnson either doesn’t know what he’s talking about, or simply suits the text to say what he wishes it to say. If he says Jesus wasn’t divine while in a human body, then the angels can’t give witness to His divinity. If Jesus was divine on earth, then he can’t say Jesus was “not God” or was “just a man.”

Of course Johnson’s whole discussion of Jesus laying aside His divinity is to support his claim that we are to go around performing miracles and bringing in the Kingdom of God. I agree by saying we should and can help grow the Kingdom of God (Gen 1.28-30; Mk 4.32; Col 1.6) by proclaiming the gospel to all the nations. But I disagree that we grow the Kingdom by performing miracles in the name of God, or, more likely, by calling down God’s power under our own prerogatives.

They want visions. Paul had visions. He told nobody about one of those visions for fourteen years (2 Cor 12.2) until he was compelled (12.11) to do so. Even when he did give the vision, it was at best ambiguously vague and set in the third person. The only specific details we have in that section are the words of Christ, “My grace is sufficient for you, for My power is made perfect in weakness” (12.9).

Some who read this will disagree, some may be offended, while others may think I’m a self-righteous nit-picker. Neither God nor I hate this man, but I do think Johnson is making an egregious error. As a teacher and pastor he is to have a greater knowledge of the Word. And if he knows he’s in the wrong, he is bypassing ignorance and is deliberately leading his church astray.

I write this review because I want people to see the errors of Johnson and all of Bethel’s teaching. I don’t claim to have a perfect theology, but we are commanded to stay awake and to walk circumspectly, not as unwise but as wise (Eph. 5.15). We are to keep watch for wolves and false prophets who teach twisted things and who seek to draw away, if possible, even the elect (Matt. 24.24; Mk. 13.22).

Pay careful attention to yourselves and to all the flock, in which the Holy Spirit has made you overseers, to care for the church of God, which he obtained with his own blood. I know that after my departure fierce wolves will come in among you, not sparing the flock; and from among your own selves will arise men speaking twisted things, to draw away the disciples after them. Therefore be alert…

An appalling and horrible thing has happened in the land: the prophets prophesy falsely, and the priests rule at their direction; my people love to have it so, but what will you do when the end comes?

To whom shall I speak and give warning, that they may hear? Behold, their ears are uncircumcised, they cannot listen; behold, the word of the LORD is to them an object of scorn; they take no pleasure in it.

For the time is coming when people will not endure sound teaching, but having itching ears they will accumulate for themselves teachers to suit their own passions, and will turn away from listening to the truth and wander off into myths. As for you, always be sober-minded, endure suffering, do the work of an evangelist, fulfill your ministry.