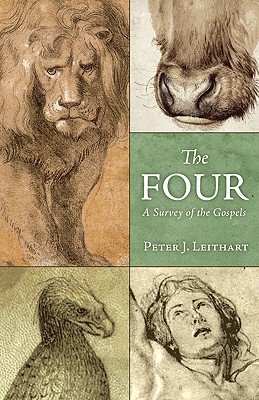 I’ve fallen into the opportunity with this blog to pick up books on a way to study the gospels as I’ve always wanted to do. Already I’ve reviewed commentaries on Mark, and I’ve previously reviewed Richard Hays’ Reading Backwards, a book on how the Gospel read back into the OT to show how they pointed forward to Jesus. For future reference, I have two ZECNT commentaries (Matthew and Mark) to review, along with John in the BECNT series. I think I should know something about the Gospels after all this. And on top of that, I get to review Peter Leithart’s latest book The Four: A Survey of the Gospels.

His concern here is for those who miss the point of the Gospels. While much of the technical Christological discussions are good an important, Leithart asks, “Whatever happened to the Gospels in all this? Haven’t we left the living, risen Jesus buried in a cave of jargon and metaphysics?” (p 13).

His writing style is intended to be like that of his OT survey, A House For My Name (my review).

Chapter One starts with Daniel and other prophets speaking of days to come, when God does a new thing for the Babylonian exiles. He will lead them back to their land and a new covenant will be instituted. He then covers the intertestamental period.

Chapter Two gives us a harmonized picture of Jesus’ life, and it’s done very well. Again, in keeping with the purpose of this book, the bigger picture is seen.

In Chapter Three Leitharts puts forth arguments that there is likely no Q document, agrees with the early church fathers that Matthew was written first, and successfully argues for both early gospels and an early New Testament.

Chapters four through seven give overall summaries of Matthew, Mark, Luke, and John.

Besides the latter half of the chapter on Matthew, I enjoyed the readings on all of the Gospels, especially Luke. Leithart puts Luke and Acts together, though he mainly focuses on Luke. Jesus has come to release the oppressed, and Israel should take part in the true fast of “dividing bread with the hungry.” Jesus comes to defeat the enemy behind the enemy, that ultimate enemy being Satan. And in doing so he upturns the social establishment showing them what true honour is, and that it is not to be gained before men, but ultimately before God. He shows a keen understanding of the social context, how subtle it is, and how Jesus easily subverts the Pharisees understanding of honour to reveal to them that it is only the humble and lowly who will receive honour before God.

For all of these examples there is no explanation for why the typology of Herod to Saul, or John to Samuel, or Jesus to Elisha. It is simply expressed as being the way it is.

I felt the majority of Chapter One was unnecessary. The history is important, yes, but I don’t think it was very relevant for the books purposes.

On the upside, if you are well-studied in the intertestamental times, this book would give a good summary and perhaps clear some things up for you.

The Chapter on Matthew was pretty dry.

Yet in all of this, he doesn’t cover much of the book of Matthew itself and it’s interconnections like he does with the other gospels.

When I read Leithart’s OT survey A House For My Name, I loved it. It’s still my favourite book (or one of them) I’ve reviewed so far. But this book on the gospels, though it gets the job done, I wouldn’t make it my number one choice. Overall I felt like much of it was lacking. Many general readers who pick up this book would have a harder time getting through the first chapter, indeed even seeing it’s relevance.

Buy it on Amazon

Disclosure: I received this book free from Canon Press. The opinions I have expressed are my own, and I was not required to write a positive review. I am disclosing this in accordance with the Federal Trade Commission’s 16 CFR, Part 255 http://www.access.gpo.gov/nara/cfr/waisidx_03/16cfr255_03.html.