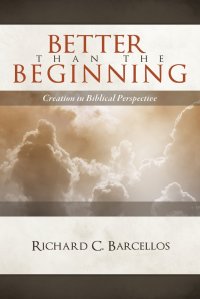 This is not your usual book on creation. Creation is more than merely young vs. old earth, creation vs. evolution, 7 days vs. 7 ages, etc. Oftentimes we hear about scientists, theologians, and Christians who talk about creation as just a ‘beginning’ sequence, but in Barcellos’ books he shows how creation requires more from us than mere acknowledgement of its happening.

God intended a goal in creation, it was a means to an end. Despite man’s failings, God will see to it that the planned end will arrive. Barcellos takes us through Scriptures to show God’s ultimate purpose in creation.

Chapter 1: Creation is for the glory of God. Barcellos starts with exposition of Romans 11:36 showing all things are “for Him.”

Chapter 2: Shows how the Trinity took part in creation, in providence, and in the new creation. All three person are eternal, are God, and by/through/for the trinity was creation created.

Chapter 3: Looks at how creation points to Christ, how it is through Him that we receive our redemption and become ‘new creations.’ We depend on the Son for our initial and continuing existence and for our redemption.

Chapter 4 and 5: Creation shows the majesty of God, yet because of sin we are rebellious , wicked, self-centered, and we choose to ignore his eternality.

Chapter 6: Shows the importance of Genesis 1:1, why it was important to Moses, and how it focuses on important themes (God’s rulership, man’s uniqueness, and man’s fall all in the first three chapters).

Chapter 7: What actually happened in creation? Was it 7 days? Barcellos thinks so, and gives a number of arguments that point in that direction (Exodus 20 being one of them).

Chapter 8 and 9: Man is unique, and we are to reflect God. Adam was a representative who was to be like God. In ruling over creation in Genesis 1:28, Adam was the king over creation, but forfeited it by being a disobedient priest. Because of sin, Adam could not completely fulfill his prophetic position like he could have without sin.

Chapter 10 and 11: Shows what is so important about the Sabbath, and how we get from the garden to the temple to Jesus to the new creation (the new world). The Sabbath was a symbol for what we would one day enjoy in the new age when all is set right.

Chapter 12: “The end is the beginning glorified. The end is that to which the beginning was made to attain” (p. 150). Due to Christ’s obedience, He obtains an eternal inheritance to give to us what we forfeited so that we may be with Him for all eternity. We are made in the image of God, and we are important to Him. We are the apex of His creation.

Barcellos seeks to show all the Trinity in Creation. The Father, the Son, and the Holy Spirit all took part in creation, all take part in keeping the world running, and all take part in salvation and the ‘new creation’ that Christians become once saved.

Explains that Godis above creation. Trying to explain the Trinity by describing Him as an egg (3 parts), water, or even bacon “always breaks down and ends up trivializing the sacred” (p. 67). Barcellos attempts to explain the Trinity in terms of ‘essence’ and ‘persons’, and it makes some sense and adds to the overall understanding of the Trinity.

I enjoyed reading his “Seven Observations Tying the end of the Bible with the Beginning of the Bible” in Chapter 10 “The Sabbath Rest of Creation (I).”
1. The first heavens and earth become new
2. The tree of life is back
3. The New Jerusalem is described with symbolic language often used of temples (Rev. 21:16-18; cf. 1 Kings 6:20).
And more….

Barcellos always brings it back to Christ and the Gospel to show the “Son-tilted focus” of creation.

In many of the chapters Barcellos shows us practical implications of what he’s been saying. Why should we care about the Trinity? To know how to give proper praise and adoration for their work in both the old and the new creation, and to know what the Bible teaches about creation and redemption together. If Psalm 19 points to the awesomeness of God, why doesn’t everyone acknowledge it? Because of sin, and through it we see man’s selectivity in choosing what to ignore (God’s magnificence) and what to believe (anything else).

Often times the Scripture quotations, hymns, and other church leader/theologian quotes seem to get in the way. They are more of a hindrance than a help. In chapter 11 there were 3 pages worth of quotations from Hebrews. Can I really say that quoting Scripture is bad? No, and yes. It’s not bad, but when there is so much of it, yes. When stating his case, there seems to be Scripture on top of Scripture on top of Scripture with a few bits of commentary in between. Rather than quoting all of the Scripture (with specific verses in CAPS LOCK), there would have been a better flow if many of the Scriptures had been left as references.

Perhaps. Barcellos does a good job keeping with the theme throughout the book. Yet in most of the book I couldn’t help but feel a little bored. These were originally a set of sermons, and I could tell. But also I was already familiar with much of what I read. Whether this was from my own Bible College experience or from other books I read I’m not sure, but there wasn’t much in this book that was new to me. Some of the writing was a little drab, but overall, given the consistent theme of the book, I would recommend this to new readers who haven’t had much exposure to the doctrine of creation that runs throughout the Bible.

[A big thanks to Reformed Baptist Academic Press for allowing me a free copy of this book. I was not obligated to post a positive review in return for this copy.]