If you do well will not [your countenance] be lifted? If you do not do well, at the door a sin offering is lying down. Now to you will be his desire but you must rule over him – (Gen 4.7).

In the newest NSBT volume Who Shall Ascend the Mountain of the Lord? (my review here), L. Michael Morales surmises that Leviticus is the center of the Pentateuch. In addition, Moses is a Levite and, as the main author of the Pentateuch, we should expect Levitical language to reverberate throughout the other four book of Torah (and the OT). This language centers around the Levitical cultus and priesthood which has the goal of meeting and fellowshipping with God.

Genesis 4 has presented many (i.e., me) a mind-teaser. First, why are Cain and Abel bringing sacrifices to God? Second, In 4.6-7 God asks, Cain,

Why are you angry, and why has your face fallen? If you do well, will you not be accepted? And if you do not do well, sin is crouching at the door. Its desire is for you, but you must rule over it.

Morales has written an article about this topic (which this post took its title from), and I’ll try to summarize part of his argument below. Morales notes how Adoniram Judson, Adam Clarke, Jamieson, Fausset, and Brown, and Young’s Literal Translation all translated “sin” as “sin offering.” Also, Matthew Henry thought both translations were valid.

Having grown up hearing the traditional teaching of this text, I’ve never thought to question the meaning. But Morales brings up a few questions:

Perhaps we should examine the alternate translation given at the top of the post and the context around Genesis 4.7. As Morales says, “All translation is interpretation, and the key to interpretation is context” (186).

Though Genesis 1-3 doesn’t state this explicitly, the rest of the Bible seems to say that the garden of Eden was a sanctuary, the temple of God. Derek Rishmawy presents 9 examples, and a few are given below:

As Morales argues, it is “the expulsion from Eden is the catalyst which sets the biblical drama of redemption in motion. It explains the logic and necessity of the Israelite system of worship and sacrifice” in that God brings Israel to him through atonement (187).

As the comparison goes, the “door” of Gen 4.7 would be the entrance to the Edenic-Temple, where God’s presence was. The cherubim guarded this “temple gate” (so that Adam, Eve, and anyone else who wanted to enter, could not do so). “In the tabernacle system, the ‘door’ served as the place where Israelites would come to present their offerings” (187). As Exodus 29.42-43 tells us,

After Adam and Eve are expelled, in their sinful state they are no longer able to meet with God face to face in the Garden. . . . The Gate of the Garden becomes the Sanctuary where Adam and Eve and their descendants were to meet with God, worship Him, and bring their sacrifices. Here the Shekinah glory was manifested as God came down to hold communion with them (187).

How is the sin offering “lying down”? In Psalm 23, the psalmist reflects upon YHWH as a shepherd, and “the same root as the participle in Gen 4.7 is used in v. 2: ‘he makes me lie down (rbts) in green pastures.’ Precisely this picture of a lamb or goat (or any animal) lying down tranquilly is the most common image in places where this verb is used throughout the Old Testament” (187).

So at the “door,” or the “entrance” to the garden of Eden where God would meet with the Adam Family, Cain could offer a sin offering. He could lay it down on the altar. “It could be, then, that YHWH had revealed to Cain the means by which he might be restored to divine fellowship, precisely the same means he would later reveal to Israel through Moses in the book of Leviticus: a sin offering at the sanctuary doorway” (57). Although that would mean Cain would have to take a sheep from his brother Abel, the one who’s offering was accepted by God. And that’s a problem for Cain. 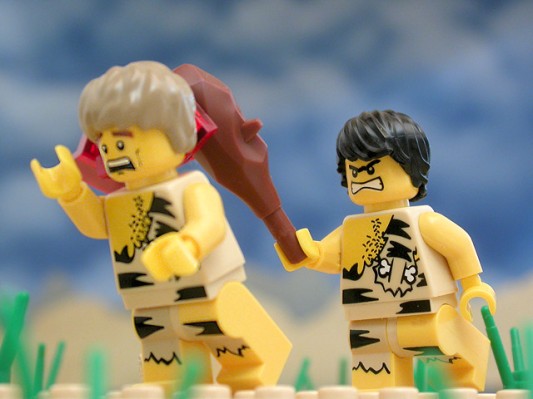 But as for the rest, you’ll have to read the article (or read Morales’ book!).

There’s more to this argument, but to keep this from getting longer I’ll stop now. I find Morales’ discussion pretty convincing. Although I don’t know Hebrew, and I’m no scholar, the contextual cues that bring Genesis and Leviticus together are plausible. Both the traditional and Morales’ understanding say that Cain could repent, but Morales’ proposal has more meat. Know we know how and where the Adam Family gave sacrifices, and thus how Cain could have repented. However, since Cain refused to obey God’s command, but instead killed Abel, he is driven away east of Eden (Gen 4.14), just like his parents were (Gen 3.24).

Feel free to leave your thoughts in the comments section. I’d love to hear them!

Buy it on Amazon today!