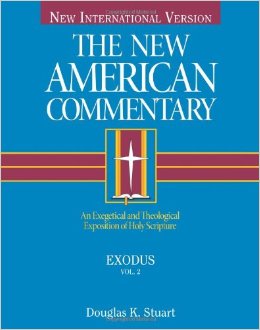 Exodus is two sides of the same coin. In the first 19 chapters (and in a few near the end)

Exciting? Yes. But then we have the other side of the coin.

That all said, with varying commentators and equally varying viewpoints, there’s a high chance Exodus can get the shaft and remain (seemingly) dull and lifeless to many. Thankfully with some humour and plenty of common sense, Douglas Stuart hits the nail on the head with this one, making it all a bit easier for us.

Stuart is known for

In his huge work here he seeks to bring the text to life and show us what Moses was thinking when he wrote part two of his “pentology.”

According to Stuart, Exodus is split into two parts:

There are many excursuses thrown into the mix that are both helpful and interesting (if you haven’t seen, I’ve already posted one two of them dealing with Slavery in the OT and the Book of Life). Here is a list of a few more:

Who You Gonna Call?

Stuart seeks to dispel many myths and conjectures by others, ranging from his excursus How Many Israelites Left Egypt? (297-303) to whether or not God punishes children for the sins of their parents (Ex 20-5-6). Of course in the OT we see many examples of a “harsh and angry” God who unjustly kills his creation. Yet this is not what Stuart sees.

He says of 15.7, “In fact, the just God revealed in the Bible will not tolerate evil (though he is extremely patient in waiting for repentance, as he was for at least eighty years with the Egyptians) and plans for its eventual total elimination…. Those offended by these facts about God are wishing for a reality that has never existed. He does get mad; he does smash his foes, and he is majestic in doing so” (352, emphasis mine, similar ideas also seen in 32.26-28).

21.20-21; Stuart says that corporeal punishment was suitable to be used on slaves as punishment (in fact, he says it has been used throughout all of history, with only many in the latter part of the twentieth century in the modern Western world having a problem with it). However, one could not go overboard on his slave. There was punishment, and then there was abuse. Stuart keeps his eye on the surrounding laws (21.18-19, 26-27) showing they would be employed to “make sure the employer did not get off without penalty” (491).

22.16-17; Paying the bride price was not degrading to women. In fact, in this time it honoured the value of women by “The betrothal/bride price system was designed to make marriage harder to come by than what could be achieved on whim or quick decision, and it elevated marriage accordingly because people instinctively value what is hard and costly to get” (510).

25-31; 35-40; Here we find what is deemed the most “boring” part of Exodus. While true (for me), nonetheless it is probably the high point of Exodus, where YHWH says he will actually dwell among his people (Ex 25.8). Stuart gives a pretty detailed account of the materials used in, the building of, and the functional use of the tabernacle. Unfortunately Stuart doesn’t look much at how temples were used in ANE culture, but he does look at specific items in the tabernacle (e.g., lampstand) and how it is seen throughout the OT and NT (Gen 8.11; Ps 52.8; Zech 4.11-12; Rev 11.4).

I should say that just as these chapters aren’t easy to read in the Bible, neither are they simple to read here. Mainly, there is a lot of information giving one plenty to look at. Though te pastor will have to sift through a lot of details.

32.19; Did Moses break the Commandments out of hasty anger? No. In fact, it was “an important symbolic act done carefully, deliberately, and openly for the benefit of the Israelites because of the way violation of a covenant is routinely described in the ancient semitic world as a ‘breaking’ of that ‘covenant [Zech 11:10]'” (677).

Surely there is more that could be said about different portions of this commentary, but I cannot name everything. As the commentary proper is 794 pages, there’s much-too-much for me to say here. Stuart has many insights into the ANE culture and lays them out for the reader to see how the Exodus lies in history.

Highly. At 826 pages there’s more than enough to read and glean here. Exodus is near impossible to read and understand on your own. Yes, while we are filled with the Spirit of the Lord, that doesn’t mean he’ll reveal to you the cultural mindset of a 15th century Egyptian people while you read is word. But what we can do is rely on others who have put in the time to study God’s word, and who equally rely on him to reveal the intended meaning as they study. With scholarly issues left almost wholly to the footnotes, this commentary is easy to read. Used side by side with Enns’ commentary and you should have your hands full for a long time.

[Special thanks to Chris at B&H for allowing me to review this book! I was not obligated to provide a positive review in exchange for this book.]