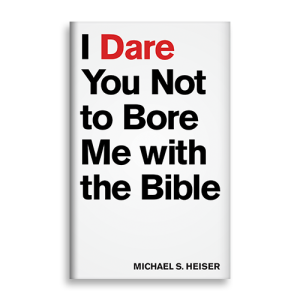 Thanks to Lexham Press, I was able to read Michael Heiser’s I Dare You Not to Bore Me with the Bible on Logos. While teaching at a Bible College, Heiser was challenged not to bore his students with the Bible. Truly understanding the Bible means digging into it, not simply reading it. While reading it is certainly important, studying it on your own time brings more understanding, growth, maturity to your life. One thing is for certain, according to Heiser, “If it’s weird, it’s important.” I would conclude that ‘weird’ is a broad term, meaning that if the Bible says anything that is outside of your Christianity 101 knowledge, it’s weird, thus, important.

Take, for instance, the story of the blind, paralyzed man at the pool of Bethesda. It’s a story your likely to be familiar with but there’s something you may not have noticed before (depending on your translation).

“1 After this there was a feast of the Jews, and Jesus went up to Jerusalem. 2 Now there is in Jerusalem by the Sheep Gate a pool, in Aramaic called Bethesda, which has five roofed colonnades. 3 In these lay a multitude of invalids—blind, lame, and paralyzed. 5 One man was there who had been an invalid for thirty-eight years. 6 When Jesus saw him lying there and knew that he had already been there a long time, he said to him, “Do you want to be healed?” 7 The sick man answered him, “Sir, I have no one to put me into the pool when the water is stirred up, and while I am going another steps down before me.” 8 Jesus said to him, “Get up, take up your bed, and walk.” 9 And at once the man was healed, and he took up his bed and walked. Now that day was the Sabbath.”

If you don’t notice anything too out of the ordinary, count the verses from the beginning and see what you can find. Odds are you’ll quickly realize that verse 4 is missing! Heresy!? Should we now throw away our NIV and ESV Bibles (and our NSRV, CEV, NLT, and NET versions)?

The translations mentioned above simply don’t put verse 4 in the Bibles. NASB and NCV place the verse inside brackets, and KJV and NKJV treat the verse normally right along with the rest. In case your version doesn’t have the verse, the omitted words read: “for an angel of the Lord went down at certain seasons into the pool and stirred up the water; whoever then first, after the stirring up of the water, stepped in was made well from whatever disease with which he was afflicted” (John 5.4, NASB).

So Why is John 5.4 in Some Bibles and Not in Others?

There is a disagreement between manuscripts of the Greek New Testament. I’m not going to get into anything technical here, and neither does Heiser, so don’t stop reading now. The omitted verse of John 5.4 is not found in the earliest and most accurate manuscripts of John’s gospel. Textual critics (scholars who make a careers of comparing manuscripts, and, yes, there are conservative ones too), “have discovered that in roughly two dozen manuscripts scribes put asterisk marks at the verse to warn the next scribe who would copy the manuscript that the verse was likely not original” (p 136). Most likely it was added by a scribe for whatever reason and then left in the text, though marked as unoriginal.

So What’s the Significance?

The problem with the story isn’t the angel. The Bible has plenty of stories with angels. The problem is the superstition surrounding angels (just like how, today, many are superstitious of black cats. Yet it doesn’t matter the color of the cat. Black cats, white cats, speckled cats, they all taste the same).

“The idea that an angel stirred the waters at a given time during the year was one such superstition. John 5:7 mentions the stirring of the water but does not mention the angel. It’s likely that John knew of the belief about the waters of Bethesda but chose to leave it out for a specific reason. Perhaps he does not wish to endorse that an angel was stirring the water. By excluding the popular belief about the angel, John focuses his readers on the healer who was indeed present—Jesus” (p 137).

What Can We Learn?

Not stopping with the facts, Heiser moves to give practical application, even on such a trivial matter as this.

No matter what you think about textual criticism, Christians can and do disagree on this issue. We may disagree with the method, but we should not attack the character of those with whom we disagree with. We all want to know the original wording of the Bible, and issues like these should be discussed with grace, respect, and love.