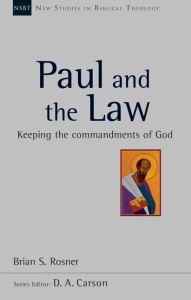 The author, Brian Rosner, starts us off with this verse in 1 Corinthians:

“For neither circumcision counts for anything nor uncircumcision, but keeping the commandments of God” (1 Cor. 7:19 ESV)

Hold on, wasn’t it God’s command to be circumcised? If neither one counts for anything, then what are God’s commandments that are to be kept?

If that wasn’t enough, Rosner present us with another puzzle:

Paul tells us Christ has abolished the law with its commandments and ordinances (Eph. 2:15), but then later quotes one of the commandments that was done away with (Eph. 6:1-2). But then, does our faith in Christ overthrow (abolish) the law? No! It upholds it! (Rom. 3:31).

Is Paul inconsistent? Is he making it up as he moves along? Did he go overboard on the matzah balls?

Studies on Paul’s understanding and use of the Law of Moses have been notoriously wrought with difficulties. How does the Mosaic Law affect the relationship between Christian Jews and Christian Gentiles? What of Paul’s views on salvation, salvation history, Israel, the church, ethics, and anthropology (to name a few). To merely take away the Law is to interfere with all of those ideas.

Brian Rosner is focused on the BIG picture: The question is not which bits of the law Paul is referring to (i.e. moral, ceremonial, civil – often times they intermingle!), but the law as what (in what capacity does the law function?).

In three swift moves Paul shows his (consistent) thoughts on the law:

What does this mean? Paul shows that Christians are not under the law. They do not walk according to the law, but they fulfill the law. The law of Moses is replaced by the law of Christ in our lives, but this doesn’t mean the law is worthless. It still has ongoing value because it is ‘for us’, it points us to the Gospel of Jesus Christ. Not only that, but it teaches us wisdom.

Chapter 2: Rosner shows what it means for Christians and Gentiles to not be under the law. He shows that the Law is a failed path to life, for breaking it means death, and nobody can keep the entire Law. 1 Timothy 1:8-10 says that the Law is used as law for the lawless. The righteous do not need it for they know how to live.

1. Omission: Absence of speaking of the law
2. Reversal: Saying the very opposite
3. Substitution: putting something else in it’s place

Chapter 4: Paul replaces the law with the law of faith, the law of Christ (because Christ has fulfilled the law), shows what the ‘law of Christ’ means in Galatians 6:1-2, and shows how we walk in the newness of the Spirit.

Chapter 5: Rosner writes how the law was/is prophetic, showing how Paul (correctly) revealed (not stretched) how many OT references point to the Gospel. He shows how Abraham believed by faith and was accepted before the law, how the law was written ‘for us’ who believe.

Chapter 6: How did Paul view the Law (and OT Scripture) as wisdom as seen through the Psalms, how the psalter internalized and lived out the law, and as seen in the order of creation and to God’s goodness. Rosner then shows examples of how Paul used the wisdom of the Law for Christian ethics in his letters.

Chapter 7: Rosner gives about 8 (very helpful) charts for us to visualize what he has been talking about, shows how this view of Paul’s view of the Law solves the puzzle between God’s free grace and His demand for holy living.

Rosner assembles many of Paul’s contradictory sayings and shows that they do connect together revealing (to those who think otherwise) Paul did know how to express himself consistently in his letters. Rosner’s reasonings makes sense as a whole, and this book will change how you read reading Paul’s letters. Simply seeing the word “wise” in his letters will remind you of a host of Old Testament and inter-testamental meanings. Which leads to the next cup o’ chocolate…

Rosner floods us with Old Testament meanings that Paul would know. Why? To remind us that as a Pharisaic Jew Paul really knew the law, and he uses much of the same language/phrases/idioms in the NT.  And not just from the Old Testament, but including the time between the Old and the New Testaments. There are plenty of writings from that period, and they had an influence on Paul’s life and the lives of other Jews. Jews would read Paul’s letters and see a familiar idiom replaced. Instead of “walking according to the Law,” we now “walk according to the Spirit.” We are now “under the law of Christ” (1 Cor. 9:21).

Rosner’s view of showing the Law to be prophecy and wisdom was a wonderful treatment. If Christians are no longer under the law, then what do we do with it? Read it and thank God we don’t have to live like that anymore? How is that ‘profitable’? Rosner does away with the idea of only following the moral laws as opposed to the civil/ceremonial laws. In this light, the whole Law (read: Gen. 1:1-Deut. 34:12) has application to our lives. (Yes, even Leviticus). The Law exemplifies wisdom because it came from God, it is rooted in His good character, and it mirrors the boundaries He has placed over the world and how to live in them.

Rosner was wordy at times, with his syntax being difficult to understand (though to be expected with the NSBT series. It ain’t kindergarten – nor should it be). I may be in the minority here, for I’ve seen other reviewers say Rosner was clear and easy to read. Yes, he usually was clear, and often times easy, but on the same hand, not.

If you are interested in Paul’s thoughts on the Mosaic Law, then this book is for you. Rosner’s thoughts are clear and well-thought out. There is plenty here to read, to study, to figure out your (and Paul’s) position on the law. It makes sense. I would love to see some examples of the difficult laws as wisdom, but with this hermeneutic in place I expect to see more books on how the law is to be used as wisdom in our lives, in addition to my own study. This isn’t the easiest of reads, but it’s definitely not the most difficult.  As D. A. Carson said, “This is a book to read slowly…a book to ponder” (12). Enjoy.